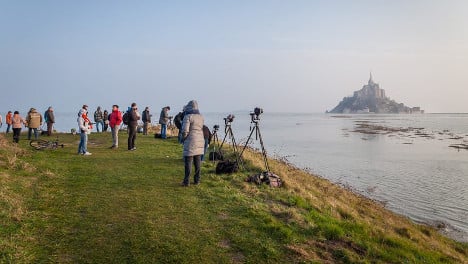 Mont St Michel on Saturday. Photo: Anibas Photography
A record-breaking crowd gathered at the rocky island topped with a Gothic Benedictine abbey to watch the sea surge up the bay on the Normandy coast, which is exposed to some of Europe's strongest tides.
But the festive atmosphere as night fell and a wall of water as high as a four-storey building swept up the estuary was tempered by news of the drownings.
While the deaths of a 70-year-old fisherman swept away in the Gironde region of southwestern France, and of another man who was collecting shellfish off the Ile Grande further north, were not directly linked to the so-called supertide, 15 people had to be rescued in the Brittany region alone after becoming trapped by afternoon tides.
Driven by the effects of the solar eclipse on Friday, the spring tide on Saturday night at Mont Saint-Michel peaked at a record high of more than 14 metres (46 feet), or a coefficient of 119 out of a possible maximum of 120.
Spectators packed a near-kilometre-long footbridge that links the Unesco World Heritage Site with the mainland while others watched from the crowded ramparts of the granite islet, which is visited by three million people a year.
IN PICTURES: See more from Saturday's super tide Danger warning
Officials at France's Navy Oceanic and Hydrological Service (SHOM) had warned that the high tide on Saturday, which peaked just after 2000 GMT, would pose a danger to people venturing out too far.
But even before dawn, tourists from France and the world over — Japanese, Germans and Belgians in particular — were taking up their places to watch the spectacle.
Some 10,000 people had already turned up at Mont Saint-Michel on Friday evening — where as the saying goes, the sea rises "at the speed of a galloping horse" — only for the tide not to reach predicted levels.
Although dubbed the "tide of the century," the "supertide" phenomenon occurs once every 18 years.
In the nearby Breton coastal town of Saint Malo, to the west of Mont Saint-Michel, around 20,000 people gathered to watch massive waves crash onto the shore.
Among them, Italian couple Francesca and Gianni had travelled 1,400 kilometres (869 miles) to witness the special event.

The spectacular phenomenon is also happening in other parts of the globe, with Canada's Bay of Fundy on the Atlantic Coast expected to see a tidal surge of 16 metres.
The "supertide" will also be felt in Tierra del Fuego off the southernmost tip of the South American mainland, the northern coast of Australia and the Bristol Channel in Britain.
The last so-called tide of the century was on March 10, 1997 and the next will be on March 3, 2033.