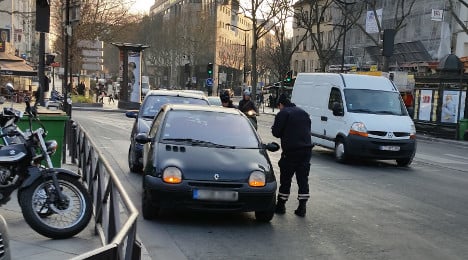 French authorities announced Monday that emergency traffic-limitation measures to combat high pollution levels in Paris would not be extended as forecasts showed the air was clearing.

Paris authorities halved the number of cars on the road by banning all vehicles with licence plates ending in odd numbers after a prolonged spike in pollution last week.

They were planning to ban cars with even numbers on Tuesday, but the scheme was halted following improving forecasts.

"Due to the improving situation today and tomorrow, the alternative traffic (plan) will not be renewed Tuesday," announced Ecology Minister Segolene Royal, who took time to salute "the good citizenship of motorists who understood the necessity of this measure."

The Airparif monitoring agency said smog density was still near alert levels Monday, but rain forecast for Tuesday was expected to clear the air.

Though public transport is free of charge to take the sting out of the restrictions, ferociously independent drivers in the capital rail against the measure, despite it having been used only twice since 1997.

French police reported  that 750 police were on duty on Monday to ensure the rules were observed. They had 154 check points in place in and around Paris as well as 57 mobile units.

Authorities did however report a drop in road traffic of between 25 and 40 percent.

Similar emergency restrictions were last implemented almost exactly a year ago — on March 17 — during a particularly bad spike in the pollution levels.

The Paris area is confronting an increasingly troubling air pollution problem, caused by vehicles, heating and heavy industry, which generate tiny floating particles that can penetrate deep into the lungs and the blood system and can cause cancer.

In Paris, authorities measure the concentration of particulates with a diameter of less than 10 microns — so-called PM10 — in the air to determine pollution levels.

The safe limit for PM10 is set at 80 microgrammes per cubic metre (mcg/m3), with levels in Paris Monday expected to be somewhere between 40 and 55 mcg/m3. The city's alert level is fixed at 50 mcg/m3.

According to a 2011 World Health Organisation report, the planet's most polluted city was Ahvaz in Iran with an average of 372 mcg/m3.