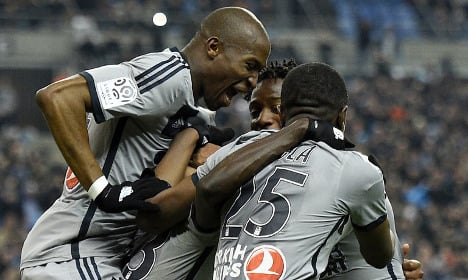 Marseille's Ghanaian forward Andre Ayew celebrates with teammates. Photo: AFP
Michy Batshuayi came off the bench to break the deadlock before Lens collapsed late on, with the Belgian adding a second — taking his tally to six goals in his last four games — while Alaixys Romao and Andre Ayew also netted.
"The first half of the first half was positive but, after 20 minutes, we lost some ground. In the second half, the early goal eased things for us because it opened up bigger spaces to attack," said Marseille coach Marcelo Bielsa, whose side face PSG next.
"We were very efficient against Toulouse (their previous away match, a 6-1 win) and Lens and both results are harsh for our opponents. My team needs fewer chances to score and that's a good thing. Every game left is important, especially the next game against Paris."
Playing at home in the Stade de France national stadium in Paris, relegation candidates Lens had managed to keep Bielsa's men at bay for 45 minutes.
Such was there stubborn resistance that France international striker Andre-Pierre Gignac was even taken off at half time for in-form Batshuayi.
Yet within 37 seconds of coming on, the young Belgian tapped the ball in from two yards out, following a Dimitri Payet cross.
In a poor first half, midfielder Payet was a rare spark for Marseille.
But it was Batshuayi who stole the limelight with his seventh goal of the season, the third time this season he scored after coming off the bench.
The 21-year old could have doubled his tally on 56 minutes but his deft strike was correctly ruled out for offside.
In the 67th minute, Togo talisman Romao pounced on a deflected Payet free kick to add a second goal, leaving Lens with an uphill battle to grind out anything from the game.
Five minutes later, though, Ghana midfielder Ayew found himself on the end of a Benjamin Mendy cross to seal the three points for OM.
In injury time, Batshuayi bagged his second — notching a third brace in four games — with a clinical finish after a mazy Ayew run.
Marseille moved to within a point of second-placed Lyon and two off PSG, maintain Ligue 1's three-way battle of nerves with just eight games to go.
Lens, on the other hand, have their own worries at the other end of the table as they are firmly in the relegation zone, nine points behind 17th-placed Lorient in the last position of safety.
Earlier on Sunday, Monaco cruised past strugglers Reims 3-1 to reclaim fourth place in the table.
The Principality side leapfrogged Saint-Etienne, who were temporarily lifted to fourth earlier following a 2-0 win over Lille.
"My team forgot about the Champions League very quickly and managed 20 minutes of real quality. We scored twice in those first 20 minutes. Our opponents then responded," Monaco coach Leonardo Jardim said.
"We showed we could offer some attacking football. The players play together and that's very important.
"The team is improving: after a rough start of the season, everyone worked hard to get there. The victory is very important for us ahead of the international break."
PSG went top of Ligue 1 for the first time this season after title-rivals Lyon lost 2-1 at home to ten-man Nice on Saturday.
The Parisians beat Lorient 3-1 on Friday thanks to a hat-trick from giant Sweden striker Zlatan Ibrahimovic.