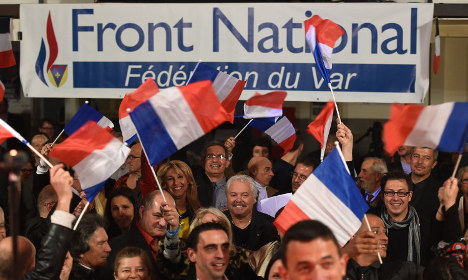 French far-right Front National (FN) party's supporters react after the announcement of results in the first round of the French departemental elections. Photo: AFP

Much has been made about how Marine Le Pen’s National Front failed to live up to expectations in the first round of the vote in France's local elections on Sunday.

In the run-up to Sunday's vote to elect representatives in France's 101 "departements" , the FN (Front National), as the party is known in France, was expected to gain over 30 percent of the vote, according to polls.

But in the end an alliance led by former president Nicolas Sarkozy took first place in Sunday's first-round polling with 29.4 percent of the vote, while the FN came second with 25.2 percent, according to latest figures from the interior ministry.

The Socialists trailed in third with an estimated 21.9 percent.

Prime Minister Manuel Valls, who had engaged the public in plenty of scaremongering over the National Front threat recently, declared joyfully on Sunday night that the party "was not the first in France". France Info radio then claimed he sat back and lit a victory cigar, leading to much mockery on Twitter (see below).

Following the results there was much talk of the wheels having come off the Le Pen bandwagon, but portraying the outcome of the first round as a failure for the party leader is missing the point, and talk of Le Pen's powers being on the wane is premature to say the least.

For a start, although figures show the centre-right UMP-UDI alliance picked up around 30 percent of the vote compared to 25.2 percent for the FN, if the results are analysed a different way then things look a lot rosier for Le Pen. Figures from the Ministry of Interior reveal a more detailed breakdown party by party and when the centre-right alliance is broken up into individual parties like the UMP, Union de la Droite and UDI,  then the FN, which makes no political alliances, comes out on top after having polled 3,196,917 votes (see figures above).

It's worth also remembering that the National Front score is historic one for the party, who up until Sunday had only achieved 15 percent of the vote in the “departemental” elections. The FN also picked up eight seats after the first round of voting, which it had never done before.

Le Pen's party has also entrenched its position in certain parts of the country.

Much was made about how the party would do in those areas that have been ruled by National Front mayors since the local elections last year. But suggestions that voters would realise their mistake and vote against the National Front on Sunday have proved false as the party has attracted loyal support in areas like Frejus, Henin-Beaumont, in the northern France and Beaucaire in the south.

“The FN is making grounds, it’s becoming deeply rooted in the French political landscape. The votes they receive are not protest votes, they are 'identity' votes. It’s people who think, ‘all the others are corrupt or they’ve failed and we haven’t tried the National Front’. "

However Le Pen's suggestion that her party will “invade the Elysée Palace” in 2017, is also wide of the mark. While the National Front’s results were very good, Marliere says they are unlikely to win many more seats in next week’s second round because many voters will cast their ballot for whichever party stands the best chance of keeping the National Front candidate from being elected.

Before he lit that cigar PM Manuel Valls called on voters to build a "dam" against the National Front, urging them to vote for a "Republican candidate" whether left or right.

And it will likely be the same in the 2017 presidential election, which polls predict that Le Pen could reach the second round run-off vote.

“There are still enough people out there in France to keep the National Front from seizing power,” Marliere says. “There’s still plenty who will always vote against the party.

“People don’t get too excited about the 'departemental' elections in France. But when it comes to a major election, like the presidential one, where the turnout can be 80 percent, all those people who abstain come out and restore the balance.”