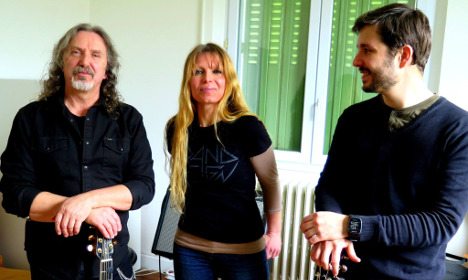 The band formerly known as Isis Child. Photo: Private
If you were to Google "Isis Child", you'd be swamped with information about young soldiers being recruited to join the ranks of extremist group Isis (Islamic State of Iraq and Syria).
While that might be productive for those seeking to find out the latest horrors committed by the jihadist group in the Middle East it proved disastrous for one French rock band and their fans.
Isis Child, a group from Lorraine in eastern France, has recently been forced to change its name after it began losing fans.
"We've had the name for about 15 years, but about a year ago we noticed that the venues stopped booking us. People couldn't find our videos or our posts. It was all about Isis. It was a disaster," guitarist Freddy Mazzucco told The Local.
The result? The band changed their name to Angel's Whisper. And the move had the opposite effect.
"When we changed the name we got interviewed by the local paper L'Est Républicain. Within two days – oh my god – we had Le Point, Le Figaro, L'Express – all the major newspapers were on the phone. Now we have pages filled on Google about our name change."
But Mazzucco is well aware that the publicity means nothing if people don't listen his band's music, "classic rock" he says was inspired by his ten years in the US listening to Van Halen and Bon Jovi.
And the YouTube clicks have been ticking upwards for the band, fronted by lead singer Nathalie Pellissier.
"Maybe it's a blessing in disguise. The French never noticed us until all this shit happened with Isis. The French are really into politics, and we don't care. Screw that shit, it's all about rock and roll."
It's not the first time the word Isis, or IS as the extremists are sometimes referred to, has caused trouble for bands or even people celebrating their birthday.
An American band called Isis, which split up in 2010, was forced to change its name to "Isis the band" after a slew of messages from its 175,000 fans on Facebook.
And in Sweden last month, police were called after passersby noticed that the balloons at a 21st birthday party appeared to say IS instead of 21.