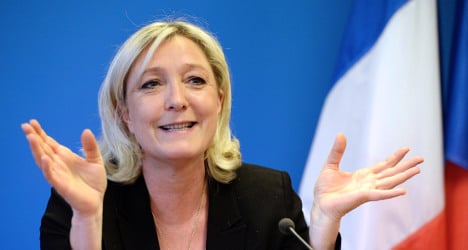 The party appeared set to capitalise on a high abstention rate, as well as a general loss of faith in the country's mainstream parties after years of economic slump.

"I feel confident," Marine Le Pen, the controversial National Front (FN) leader said as she cast her vote at a school in northern France.

With turnout at just over 18 percent by midday, Hollande called on theFrench to vote as he cast his own ballot in central France.

"Today, the (key) issue is abstention," he said. "And the score of theNational Front."

Despite topping several opinion polls with around 30 percent of the overallvote, the FN was not expected to win more than four of the 101 "departments" up for grabs, due to tactical voting by its opponents.

The ruling Socialists and conservative opposition UMP often club togetherin second-round run-offs — which are due on March 29 — just to keep the far-right from power.

That means the UMP led by former president Nicolas Sarkozy — which was running neck-and-neck with the FN in polling — was expected to make the biggest gains.

Sarkozy predicted a "wave" of departments falling to his UMP.

But tactical voting against the FN has grown increasingly controversial now that the party is no longer on the fringes, playing into Le Pen's claims that the traditional parties are out of touch with the electorate.

"It's as if the only policy of the UMP and the Socialists is to oppose the National Front," she said at a recent campaign meeting. "That's not going to reduce unemployment."

Regardless of its final tally in the departments, which control issues such as school and welfare budgets, a high percentage of votes will still boost Le Pen's bid for the presidency in 2017.

Earlier this week, she declared her party would "invade the Elysee(presidential palace)".

The FN has capitalised on anger over France's lacklustre economy, as wellas the politically explosive issues of immigration and the integration of Islam into French society.

But it has also benefited from the disastrous state of Hollande'spopularity figures.

His ratings have hit record lows, despite a temporary boost in the wake ofthe January attacks on the Charlie Hebdo magazine and a Jewish supermarket, when he was credited for rallying the country.

Hollande's Socialists and their allies on the French left were expected tolose about half of the 61 departments they currently control.

The departmental polls mark another opportunity for the party to expandbeyond impoverished areas on the outskirts of cities and deeper into French society, especially in rural areas.

"Everyone is suffering here and as soon as you suffer, you want a radicalsolution," said Patrick Vasseur, a news vendor in the village of Ribement, northern France.

"It's the economy that is boosting the FN, the lack of work, the increasein taxes."

At noon (1100 GMT), voter turnout was at just over 18 percent, some threepercent higher than at the same time in 2011, according to the interior ministry.

"I voted in the presidential election in 2012, and I have decided to nevervote again," said 22-year-old Amandine in a village in the central region of Correze.

"Politicians talk a lot, but in the end, nothing changes. They can't answer our questions."