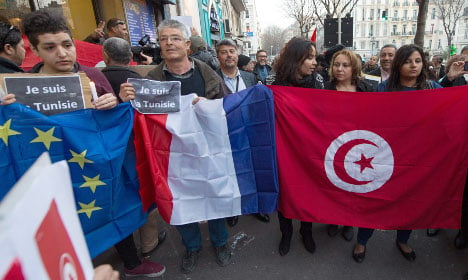 People protest outside the Tunisian General Consulate in the southern French city of Marseille on March 19, 2015. Photo: AFP

The Tunisian health minister announced that another French national was among the 20 tourists who had been killed in Wednesday's terror attack.

The identities of two of the French nationals were revealed on Thursday: 72-year-old Jean-Claude Tissier, from d'Aussillon in Tarn, southern France, and Christophe Tinois, a 59-year-old horse breeder from Castelsarrasin in south-western France.

Both were passengers on a cruise with the MSC Spendida, the tour company confirmed on Thursday. It remains unknown if the as yet unnamed third French victim was also part of the tour.
Authorities in Tunisia are still trying to identify three other victims of the attack.

Tunisia said the two gunmen who killed 21 people at its national museum trained at a militant camp in Libya, as the country marked its Independence Day in sombre fashion Friday.

The Islamic State jihadist group has claimed Wednesday's attack on foreign tourists in Tunis, the deadliest since Tunisia's 2011 revolution which sparked the Arab Spring regional uprisings.

The two assailants "left the country illegally last December for Libya and they were able to train with weapons there," Secretary of State for Security Rafik Chelly told Tunisian television.

IS, which has hundreds of Tunisians among its ranks, threatened more attacks in an audio message posted online Thursday claiming responsibility for the museum massacre.

Authorities say as many as 3,000 Tunisians have gone to Iraq, Syria and Libya to fight in jihadist ranks, raising fears of battle-hardened militants returning home to plot attacks.

Chelly named locations of several suspected training camps for Tunisians in violence-wracked Libya, including the second city Benghazi and the coastal town of Derna, which has become a stronghold for jihadists.

The president's office said security forces arrested nine suspects — "four people directly linked to the (terrorist) operation and five suspected of having ties to the cell".

And a presidential source said soldiers were to be deployed in major cities following the assault, while insisting "we are not under siege".

As international outrage grew over the attack on Tunisia — hailed as a rare success story of the Arab Spring — President Beji Caid Essebsi said his country would not be cowed by extremism.

"The process of implementing a democratic system is underway, well anchored," he told France's TF1 television. "We will never move backwards."

Essebsi was set to make a speech Friday to mark the anniversary of Tunisia's independence from France in 1956, though celebrations were dimmed after Wednesday's carnage. Donald Tusk, president of the European Council, said the EU "stands with Tunisia in its commitment to peace and democracy".

"I am shocked by today's terrorist attack at the Bardo museum in Tunis," Tusk said in a statement.

"The European Union and Tunisia will not be intimidated by terrorism, at home or abroad. We are ready to support the Tunisian government in its actions against violent extremism and commend its speedy action to free the hostages involved," he added.