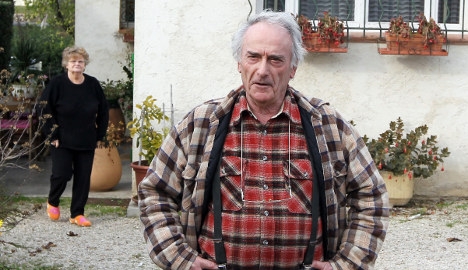 Pierre le Guennec and his wife Jacqueline in have been found guilty of stealing 271 Picasso works. Photo: AFP
The court in the French Riviera town of Grasse found Pierre and Danielle Le Guennec guilty of possessing stolen goods, after a trial that made headlines in France and abroad.
The works have been seized by authorities and will be returned to the Picasso Administration, which represents the artist's heirs.
There has been no value placed on the collection.
"We're disappointed," mumbled Pierre Le Guennec, now 75 and retired.
"We're honest people. Perhaps we don't know how to speak…" he added, before his wife blurted out: "We're just little people. We don't have a great name."
Prosecutors had called for the couple to receive a five-year suspended jail sentence.
The couple's lawyer, Evelyne Rees, said she would appeal the verdict.
"At 10:00 am, we had a solar eclipse and this decision eclipses the truth," she said.
Pierre Le Guennec insisted throughout the trial that the art legend and his wife gave him the treasure trove when he was working on the last property they lived in before Picasso died in 1973.
"Picasso had total confidence in me. Maybe it was my discretion," Le Guennec told the court.
"Monsieur and Madame called me 'little cousin'."
He said that one day, Picasso's wife Jacqueline came up to him and gave him a box with the 271 works inside, saying "this is for you."
When he got home, he found what he described as "drawings, sketches, crumpled paper."
Uninterested in the haul, he put the box in his garage and discovered it again decades later in 2009.
He went to Paris the following year to get the works authenticated at the Picasso Administration, but the artist's heirs promptly filed a complaint against him.
One of the artist's children, Maya Widmaier-Picasso, said: "It's a downright cheek to try and make us swallow that story."
"These works should never have been removed from the estate and from the history of art," said her half-brother, Claude Ruiz-Picasso.
– 'Blue period' –
During the trial, all 271 works, created between 1900 and 1932, were beamed onto a giant screen in respectful silence.
The court saw drawings of women and horses, nine very rare Cubist collages from the time Picasso was working with fellow French artist Georges Braque and a work from his "blue period," when he mainly employed shades of blue and blue-green.
Other more intimate works also graced the collection, including portraits of his mistress Fernande, drawings of his first wife Olga or a drawing of a horse for his children.
A lot of the evidence during the trial centred around why none of the works were signed, with several witnesses saying the artist would sign everything — partly to ensure against theft.
According to Gerard Sassier, the son of Picasso's long-time chambermaid, the artist once said after a theft attempt: "Anyway, nothing can be stolen as nothing is signed."
The defence argued that it would have been extremely difficult to steal from Picasso as the artist had "an amazing memory" and his property was
heavily protected like a "fortress."
One of the few plaintiffs to have known Le Guennec when he was employed by the Picasso family, the artist's grand-daughter Catherine Hutin-Blay,
acknowledged during the trial that the electrician did have a special relationship with the artist.
"We really trusted him. He was someone who was very familiar in the house and had an absolutely friendly relationship," she told the court.