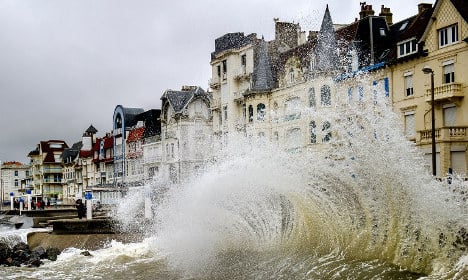 Waves hit the Wimereux waterfront, near Boulogne-sur-Mer, northern France. Photo: AFP
The "tide of the century" is something of a misnomer as it occurs every 18 years, but that doesn't mean there won't be a massive turnout along France's Atlantic coast on Saturday.
Indeed, over the last month thousands have already flocked to the country's northern and western coastal hubs in order to get a glimpse of the "supertides" that have already hit over the last month – but these are expected to be outdone by Saturday's supertide.
Friday saw the tidal coefficient reach 118 (on a scale of 120), and Saturday's will hit 119 – which is equal to the highest coefficient ever seen in France. (The tides have already been high in the last month at Mont-Saint-Michel. Photo: AFP)
The spectacle is linked to the solar eclipse that many French were lucky to witness on Friday, with the moon and sun's gravitational pull creating unusually large swells in the oceans.
Among the most popular draws are the spots on Brittany's rugged coast, as well as the legendary Mont-Saint-Michel, the Norman hillock that returns to its island state when tides come in.
Mont-Saint-Michel is expected to experience a tidal range of 14.5 metres just as it did last month (see pic below).

But it's not all fun and photo opportunities. Eleven departements along the coast are on alert for fear of flooding.
And the waves have caused concern for onlookers as well, not least BFM TV's weather presenter Fanny Agostini, who was given a surprise soaking in the clip below last month.
The high tides will also affect Canada, the UK, and even Australia.
If you're not going to get the chance to see the tide this time around, never fear – there's always next time. But don't hold your breath, the next tide of the century will occur on March 3rd… 2033.