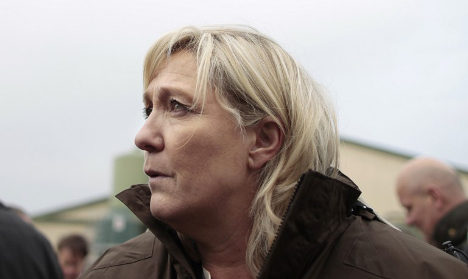 National Front leader Marine Le Pen. Photo: AFP
"She's my queen!" gushes Patricia, waiting for the arrival of Marine Le Pen, leader of France's far-right National Front.
"Marine represents everything the people of France want. I don't know what to say – she's wonderful, magnificent."
The excited 60-year-old is standing outside a community centre in the non-descript little town of Noyon deep in the northern plains of Picardy.
As France heads into local elections this weekend, Le Pen boasts the sort of adulation of which the political mainstream – the ruling Socialists and the right-wing opposition UMP – can only dream.
The political momentum is firmly behind the National Front (FN) whose anti-immigration and anti-EU platform saw it take first place in European elections and win control of 11 town halls last year.
It is again topping polls ahead of Sunday's vote.
The Picardy countryside is a picturesque but barren stretch of territory with little to offer its young people, making it an ideal recruiting ground for the FN which is polling over 40 percent across much of the region.
"People have the feeling they are being left behind by globalisation," said Vincent Rousseau, a 26-year-old English teacher standing for the FN in Ribemont. (Marine Le Pen pictured here at the Agricultural Fair in Paris last month. Photo: AFP)
Political outsiders
Le Pen – simply "Marine" to her supporters – appears at the Noyon town hall and launches into a familiar spiel.
With the French economy in prolonged stagnation and many fearful over the relentless news of jihadists in their midst, her talk of quitting the European Union, tightening borders and cracking down on radical Islam resonates.
But Le Pen spends most of her time playing up her status as a political outsider, a victim of the establishment — a message that plays particularly well with those voters who feel left behind by social and economic changes.
"It's as if the only policy of the UMP and the Socialists is to oppose the National Front," she says. "That's not going to reduce unemployment.
"All they say is 'vote for me because the other one is not nice'. It's puerile, and also reveals that the political class has run out of steam."
On this point, at least, Le Pen has the widespread agreement of political analysts.
Nonna Mayer, political scientist and far-right specialist from Sciences Po, told The Local earlier this month that the upcoming ballot is once again hugely important for the National Front.
“It’s vital for Le Pen that her party has elected representatives. It gives the party much more credibility and visibility,” she said.
SEE ALSO: The controversial record of France's far-right mayors “She knows if you want to succeed in politics, it’s not only about the leadership, but you need a party behind it. That means the presence of the National Front in all layers of democracy in France."
“It’s a long term strategy. They have been attracting new activists since 2011, including more young people and women,” she said.
The bid has paid off for the party so far, earning 11 National Front mayorships in last year's national elections.
However the problem for Le Pen is that her attempts to prove that the National Front is about more than just her have often been hindered by some of their more disreputable candidates.
“The party is trying to convince these new activists to be candidates, but some of them are not really appropriate. Le Pen needs to show they are not racist or anti-Semitic but some of these candidates are not, shall we say, respectable,” says Mayer.
Indeed, some of the new mayors in 2014 made headlines immediately for the changes they introduced to their departements, including the abolishing of a slavery memorial day and the removal of a European flag from the town hall.
Some of the new crop of candidates for the regional elections also bring a shady past with them, including one suspected pedophile, politicians with racist commenting habits online, and one who posted a picture of himself holding a gun to the head of a Hollande puppet. 'Not toothless illiterates'
Indeed, many view the FN's rise with horror.
Back at the Noyon community hall, some wait to greet Le Pen with shouts of "fascist".
"Even if she hides it behind her beautiful blonde hair, there are neo-Nazi ideas underneath," said one of the protesters, 47-year-old Pierre, who declined to give his last name.
"After she's kicked out the immigrants, it's us who will be next – the people who think."
The FN's focus on immigration is what still worries many, despite Le Pen's efforts to rid the party of the overt racism that often characterised it under her father, Jean-Marie Le Pen, until he stepped down as leader in 2011.
Yet, the belief that immigration is a legitimate economic concern – equally promoted by many mainstream politicians — makes it easy for the FN to bat away the "fascist" jibes as just another attempt to malign the party and ignore the real concerns of voters.
"I'm not racist – I don't give a damn who can live here," says Monique, a 40-something FN voter in Ribemont. "But we help foreigners a lot and that means the French have to pay."
The irony is that neither side of the debate knows exactly what to expect should Le Pen carry the momentum through to victory at the presidential election in 2017. (National Front leader Marine Le Pen. Photo: AFP)
One Noyon protester points to local FN governments that "armed police officers and pulled left-wing newspapers from libraries", and fears much worse should it win national power.
Le Pen's supporters also think the FN's true plans have yet to be revealed – but in a good way.
"She has a programme but she isn't revealing it now," says Patricia. "And with good reason because they are all stealing her ideas.
"We are not stupid at the FN. We are not toothless illiterates like they say we are. We are proud to be French, and our Marine Le Pen is everything to us – she's our future."

The local elections will be carried out on March 22nd and 29th when French voters, albeit probably not many of them, will head to the polls to elect representatives in each of the country's 101 départements or counties.