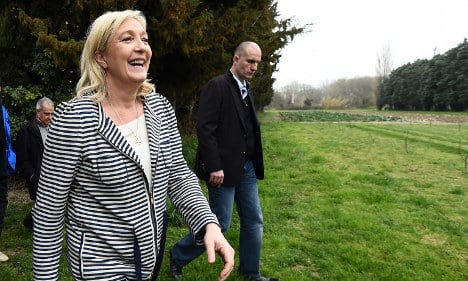 National Front leader Marine Le Pen. Photo: AFP
The comedian, Nicolas Bedos, used the term "fascist bitch" to describe Marine Le Pen in a column he penned for the Marianne magazine in January 2012.
Le Pen took the matter to court, but was told on Wednesday by a Paris appeals court that Bedos was perfectly within his rights to use the term.
The magazine's editor, Maurice Szafran, was also acquitted.
The judges said that it was "perfectly clear to any reader that the column in question was being deliberately provocative", reported the Le Figaro newspaper.
It's the second time within a year that Le Pen has lost a battle in trying to keep her name out of the mud.
In April last year, judges rejected her bid to prevent opponents from calling her a "fascist", stating that the term has no insulting character when used in a political context.
The ruling is linked to Le Pen having sued her eternal rival the far-left firebrand Jean-Luc Mélenchon over the “abusive” remarks he made about her during the 2012 presidential campaign.

“Why do you think that the French people would be the only people to want a fascist as a leader?” Mélenchon said after being shown a poll that showed Le Pen was the leading candidate for the first round of voting.

A court in Paris ruled that Mélenchon’s use of the word fascist was fair comment.

Le Pen said in 2013 that she planned to sue any journalist who referred to her party as "extreme right", claiming that it was a pejorative term being used deliberately to damage the National Front.
One political expert told The Local she may have a point, but was nevertheless making a huge mistake.