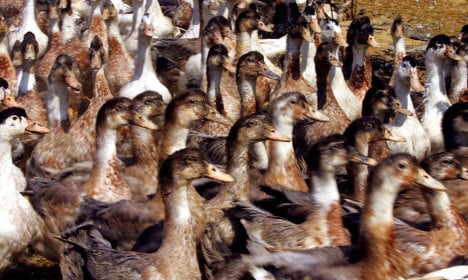 Photo: AFP
The case targeted one of France's best-known producers, Ernest Soulard, a company based in the western Vendee province which supplies top restaurants including Le Fouquet's and George V in Paris.
It was brought by animal rights group L214, which released a video in 2013 claiming to show the conditions at farms under contract to Ernest Soulard, with ducks confined in individual cages, barely able to move.
The video prompted top chefs, including multi-Michelin-starred Joel Robuchon and Britain's Gordon Ramsay, to suspend their orders with the company.
But the company said the court's decision to throw out the case supported its claims that the video was fake.
"It has been demonstrated that the images that caused such a stir on the Internet were falsified, so justice has been done," said Roland Tonarelli, director general of Ernest Soulard.
"We have turned the page with our clients, everyone is absolutely convinced that we are blameless."
L214 has denied manipulating the video, saying it received the images from someone with access to the force-feeding areas and "simply edited them together".
"It's a disappointing decision, but it's only one step in the long process of taking into account the suffering of animals and banning force-feeding," said the lawyer for L214, Helene Thouy.
"One day, we will look back on the force-feeding of animals as a barbaric practice to be filed away in the museum of horrors," she added.
Force-feeding ducks to make foie gras — a practice known as "gavage" — has been banned in several countries but remains legal in France.
However, the European Union ruled in 2011 that birds cannot be kept in individual cages and gave farms until the end of 2015 to comply.
The case against Ernest Soulard became an excuse to thrash out the long-standing debate over foie gras, a thick type of liver pate that is a traditional French delicacy enjoyed by millions, particularly at Christmas and special occasions.
It is made by force-feeding corn through a tube into ducks and geese, fattening them to around four times their natural body weight.
Tonarelli said his company sticks closely to the law.
"Even if certain people do not agree with this method of production, it isstill perfectly legal," he said.
"The well-being of the animal is key to our trade, our raison d'etre. An animal in good health makes a good product."