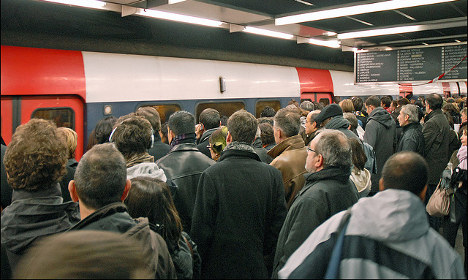 Passengers wait for the RER in Paris. Photo: Jean-Pierre Dalbéra/Flickr
At least four incidents have been reported in the last month on the RER B line on the way to Charles de Gaulle airport, with Chinese nationals among the victims every time, reported Hong Kong newspaper The Standard
The rare travel notice came after a handful of Chinese people missed their flights after being robbed, all in separate incidents.
The embassy is following up the cases with French police, reported the paper.
The warning advised passengers to "use airport buses, taxis or other transport and avoid taking the RER B line", and comes just in time for the Easter holidays when many Hong Kong tourists are planning to take advantage of the weak euro.
Mainland Chinese tourists are often targeted by thieves due to their habit of travelling with cash rather than credit cards. (A passenger waits at the Paris RER Line to Château de Versailles. Photo: Carol Lin/Flickr)
The RER service, which links Paris to the surrounding suburbs and Ile-de-France region, has a reputation for being a crime hotspot.
On Sunday, a gang of 20 thieves robbed numerous passengers in what police have called a coordinated attack.
In 2013, security was stepped up on the line after 20 robbers struck at Grigny station. Armed with pepper spray, the gang threatened passengers before taking their personal valuables in what witnesses described was a "highly organized" attack.
In January this year, a young woman was sexually assaulted by two men after she fell asleep while riding the RER near Paris.
And a recent study reports that half of French people feel unsafe when using public transport.
After the recent attack, opposition politician Valérie Pécresse once again called for more CCTV to be installed at RER stations.