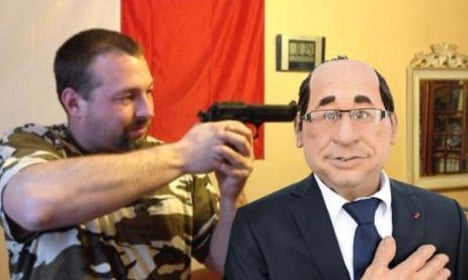 Damien Hameau-Brielles from Mayenne with a puppet of Francois Hollande. Photo: Facebook
Opinion polls suggest the far-right National Front party will top the polls in the first round of elections in French counties known as "departements", which take place on Sunday.
It will mark another significant victory for Marine Le Pen, whose efforts to soften the image of her anti-immigration, anti-EU party, continue to pay off.
Le Pen and co have worked hard to "de-demonize" the National Front by rooting out candidates with a shady past or who are liable to the odd racist view or two.
Yet her efforts can only go so far as stories once again emerge in the run-up to Sunday's ballot of skeletons emerging from the closets of several far-right candidates. Other candidates appear to have simply spoken their views, forcing the party's PR team into overdrive.
For the party's founder Jean-Marie Le Pen, who has been convicted of hate speech it's no big deal.
"We have 8,157 candidates, I believe. Of course a few of them will be peculiar," he said in an interview with French channel BFM TV.
We'll let you decide for yourselves.
Here is a list of five National Front candidates whose faces have been plastered over the press for one reason or another in recent days – and it's a lot more than just racism and bigotry.
1. The armed and racist Damien Hameau-Brielles, the main candidate for Mayenne in the north west of France, posted a picture of himself on Facebook (see above) holding a gun to the head of a puppet version of President François Hollande.
While the picture, published in 2012, has long since been deleted, another post was dug out from the past where he made racist jibes about what he considered to be the laziness of "the blacks".
2. The suspected Pedophile?
The candidate for l'Allier, central France, is 23-year-old Arnaud Couture – who has been investigated this month for the possession of child pornography. The politician confirmed the indictment but told local media that he did not wish to discuss it. As it is too late to withdraw his candidacy, he has said that he will immediately resign if he wins the election. In the image below, Couture is on the far left.

3. The anti-Muslim
While the National Front doesn't have a candidate of its own in the Charente-Maritime department, western France, it is backing openly anti-Muslim Dominique Droin. The Frenchman has posted documents online about how Muslims have taken over France "without being armed, but through the stomachs of their wives". His paper pointed out that Muslim children "were multiplying much faster than children native to France".
4. Praising a Halal fire
Sophie Touvron is running for Torcy (Seine-et-Marne), east of Paris. She once shared a news story on her Facebook account about an explosion at a Halal butchery, adding the words "TOO GOOD". The L'Express newspaper reported that the explosion and subsequent fire left two people injured, one seriously.
5. Call to suicide
In February, FN candidate in Narbonne, southern France, Fabien Rouquette took his regular Facebook postings a step too far when he shared a text-based image saying "Socialists, Communists, Muslims! Do something for the world and commit suicide." One of his colleagues in the area, Michèle Boisset, liked the post and added the comment "What a beautiful dream!" reported L'Express.
Lastly, another candidate of note is Jeanne Meyniel in Cantal, south-central France. She is 99 years old, a far cry older than the average age of candidates nationwide at 51.
A long-time advocate of the National Front, she told the Le Point newspaper that when she was asked to run for deputy councillor she said "why not? And if I am elected, then I will do it. I have things to say."
Incidentally, the National Front has one of the youngest average ages when it comes to councillor candidates at 49.4 years.
This year's revelations about party members echo similar findings in recent years. In 2013, local election candidate Anne-Sophie Leclère was expelled after saying she would prefer to see black minister Christiane Taubira minister "swinging from the branches rather than in government".
She was jailed for nine months last year.