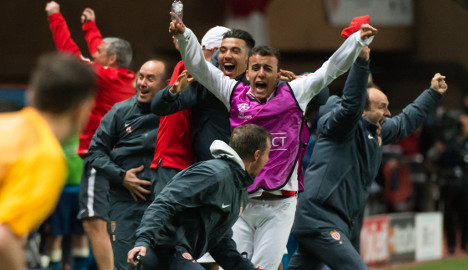 Arsenal exited the Champions League on Tuesday despite winning their Champions League last 16 second leg clash 2-0 in Monaco but losing on the away goals rule after the tie finished 3-3 on aggregate.

A first-half goal by Olivier Giroud and then Aaron Ramsey 11 minutes from time gave the Gunners hope but desperate defending by Monaco saw them hold on to reach the quarter-finals in front of a for once packed stadium which included celebrities such as U2 frontman Bono.

Monaco emulated fellow Ligue 1 side Paris Saint-Germain in eliminating a Premier League giant from this season's competition as PSG knocked out Chelsea also on away goals last week.

Arsenal manager Arsene Wenger was gracious in defeat which ended for another season his ambition of winning the piece of silverware he most desires.

"We knew it would be very difficult to score that many goals," Wenger told BeIn Sport.

"We weren't realistic enough in our approach.

"It's not a question of if we deserved to go through but of being realistic and we made too many errors in the first leg.

"We have to congratulate Monaco for their place in the last eight as they defended really well.

"In the last three months we haven't lacked in anything except our performance in the first leg.

"We have a superb spirit and great qualities," added the Frenchman, who first made his name as a top level coach at Monaco.

Arsenal skipper Per Mertesacker, who was one of the players singled out for criticism after the first leg debacle, concurred with Wenger.

"The best team went through," said Mertesacker. "Monaco deserved it because they played much better in the first leg.

"We played well today but it was a massive deficit, and it wasn't enough tonight.

"We came here and tried absolutely everything, and when you look at the game we could have scored more than two."

Manchester City will endeavour to save English football's honour on Wednesday when they bid to overturn a 2-1 deficit from the first leg against Barcelona in the forbidding surroundings of the Camp Nou.