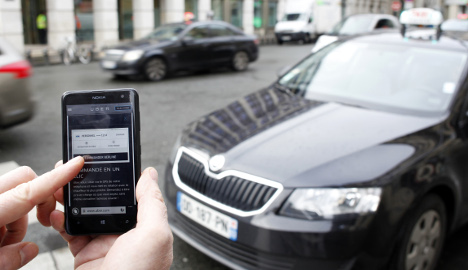 The headquarters of the French branch of the US-based firm was targetted at the request of the Paris prosecutor's office, the compan told AFP.

The enquiry centres on the UberPop smartphone application, which puts non-professional drivers with their own cars in touch with passengers via their mobile phones or a website, for rides at budget rates.

Uber, which operates in about 250 cities in 50 countries, has become an object of scorn from traditional taxi companies fighting for survival against the rise of the Silicon Valley challenger, founded in 2009.

"We see this raid as a disproportionate action carried out on a very fragile legal basis," Uber France boss Thibaud Simphal told the website of L'Obs magazine.

Earlier this month hundreds of taxi drivers from Belgium and France brought central Brussels to a virtual standstill with their vehicles in a protest against the web-based Uber.

Around 100 French taxi drivers travelled to Brussels to take part in the protest.

Uber's American founder Travis Kalanick has said the system will create 50,000 new jobs in Europe this year, and help take 400,000 cars off the roa by encouraging drivers to use taxis instead of their own vehicle.