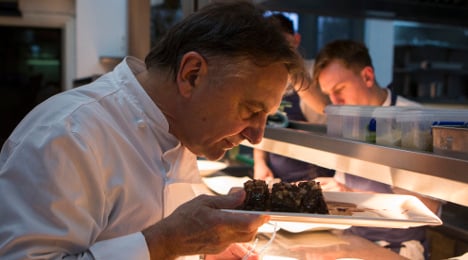 French chef Raymond Blanc is cooking for the French ambassador in London as part of the Gout de France/Good France. Photo: AFP

On Thursday around 1,300 “plats” will be dished up in selected restaurants across five continents as part of the Goût de France/Good France gastronomy festival.

The one-off event has been organised under the patronage of France’s foreign ministry and Michelin-starred chef Alain Ducasse.

France is hoping to remind the world’s taste buds just exactly why the Unesco designated French cuisine an “Intangible Cultural Heritage of Humanity” in 2010.

The carefully prepared meals will be designed to highlight French cuisine's capacity for innovation but also its core values such as quality and sustainability.

The chefs will offer a full French-style menu including an apéritif, a hot and cold starter, fish, meat or poultry followed by the obligatory cheese board. A dessert and a digistif will follow.

French chef Raymond Blanc is leading a diplomatic offensive to restore the good name of French cuisine in Britain, saying it must escape its comfort zone to reign supreme again. The 65-year-old has made his name in Britain but has stayed true to his belief in French food — and the Michelin-starred chef is now helping to revive the prestige of French cuisine.

But if he has made his life in Britain, the notion that he has turned his back on his homeland infuriates him.

"It's the biggest possible insult. I love my English friends, but I am who I am," he said.

This week he is putting his passion where his mouth is as part of the "Goût de France / Good France" initiative.

Blanc must also dish up a speech at a banquet staged at the French ambassador's residence in London.

"We're not dead. We're still alive. France has a magnificent opportunity to embrace this," he said.

Standing by his stove as the big day approaches, he describes on one hand a false case against France's "culinary genius" and the need for an honest look in the mirror by French chefs.

Seeds of doubt have been sown by The World's 50 Best Restaurants, a list produced by Britain's "Restaurant" magazine, which since it started in 2002, which gave first place to restaurants in Spain, California, Denmark and England. The French are challenging the criteria.

"Cuisine these days is obeying a fashion, one served by public relations," Blanc said, choosing his words carefully.

"I don't believe in an Anglo-Saxon conspiracy. But it's the first time that our gastronomy has been called into question," he added.

"There are questions to be asked, problems we can't ignore. In France, the traditions are sometimes heavy. It's up to us to open ourselves up, to enrich ourselves, to reinvent ourselves and to take risks without denying our heritage."

Among the things needing changing are France's 35-hour working week laws, tendencies of self-indulgence and "a lack of self-confidence".

"It's up to us to add into our heritage spices, ingredients, flavours and techniques from elsewhere," he said, citing Japan, China and Thailand.

Blanc is calling for France to emulate "the revolution under way in Britain" — something he is partly responsible for driving.

"The consumers are in charge. They want to know what percentage of their hamburger is actually horse — where their food is coming from," he said.