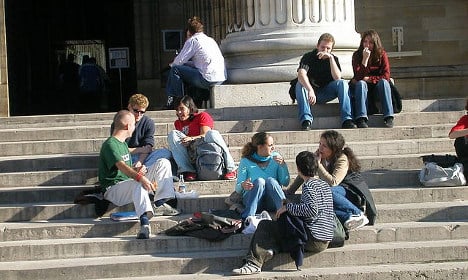 Students in at the Sorbonne University in Paris. Photo: AmitLev/Flickr

Over a month has passed since I touched down in Charles de Gaulle airport. I was armed with nothing more than a suitcase overflowing with teabags, and my heart was humming its own cheesy French soundtrack in my head (I can't sing it for you obviously but there is a lot of accordion action in this one).

My stay so far in what has been recently voted the best city to study in the world has seen me through everything clichéd and everything bizarre as I have navigated how to carve out my own niche among these legions of R-rolling jeunes who are at once both everything and nothing like those I left behind in Ireland.

The language may be alien, and there is most certainly a higher frequency of black on black clothing, but some student tropes appear to be transnational. The cool kids still loiter in the smoking area, nobody's done the reading and medicinal drinks between class are very much a thing (only now wine has replaced dirt cheap cans of cider as the tipple du choix).

Still though, there are certain instances when you feel very much like an alien abroad. Before I came here, everyone gave me their opinion on Paris. Most told me how much they loved it. Some warned me off with cries that it's too big to meet other students or too expensive to keep up the standard of boozing six nights a week at home. So I present to you a highly scientific breakdown of my Erasmus experience thus far – my Paris by numbers, if you will. Number of classically Parisian men sighted during that first walk to college (complete with gallically-chiselled cheekbones and freshly-baked baguettes tucked in crook of arm in the same manner as those at home clutch omnipresent umbrellas): Countless.

(Ditto as to number of effortlessly sophisticated women nursing a cigarette and a cafe expresso whilst staring hauntedly out of steamy bistro windows. Beginning to suspect, in fact, same two cardboard cut-outs are actually following me around in some elaborate Parisienne ploy to make every street corner look like that postcard you sent your Granny from your school trip to France when you were 13).

Number of times I felt like I was back in primary school, unsure whether to raise my hand to ask to go to the bathroom or call my lecturer by her first name (as I would at home) for fear of being hideously disrespectful: pretty much every class during that first week.

Number of times I have told my professors my (very Irish) name in class only to be met with a look as if I made it up: several (at least I'm not called Aoibheann).

Number of times the teacher has made a joke in French to which I mentally translate, appreciate and laugh at approximately ten seconds after everyone else has moved on: dozens. Number of times I tried to make friends on the Metro only to be shot down with the frostiest of French stares: Trust me, a mistake you make only once.

Number of times I have thought of an absolutely hilarious comeback only to remember all cultural references to Coronation Street or Father Ted go down like lead balloons: A few (though I save them up and tell my flatmate when I get home).

Number of times have found myself, inexplicably, answering a question in class in English with an affected French accent: Four (and each time I have given myself a very stern scolding).

Number of times I have felt like a proper Parisienne, channeling her inner Edith Piaf, Zelda Fitzerald or similar bohemian icon: fleetingly and intermittently, anytime I successfully cross the road without being flattened to a crepe for example, or that one time a homeless man on the Metro told me I had L'esprit de l'artiste (which I have let nobody hear the end of).

And lastly…. Number of times my flatmate and I have refused to act like grown up bohemiennes and spent the evening taking refuge from the wild Parisienne landscape in our PJs, watching Hunchback of Notre Dame and making ourselves sick on brioche: Absolutely none….