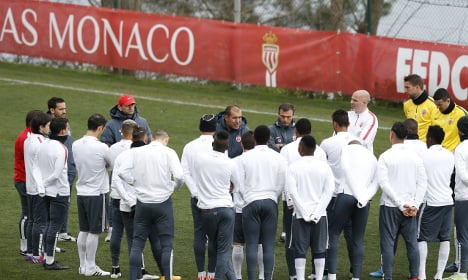 Arsene Wenger believes that Arsenal have the form to outclass Monaco on Tuesday and reach the quarter-finals of the Champions League as the only English side left in the competition.

The Gunners slumped to a shock 3-1 loss to the Principality side in the first leg at Highbury, but since then they have impressed with a 2-1 FA Cup win at Manchester United and a 3-0 trouncing of West Ham on Saturday.

Goals from Olivier Giroud, Aaron Ramsey and Mathieu Flamini in the London derby kept Arsenal in third place, seven points behind Chelsea in the league, albeit with the leaders having one game in hand.

The manner of these two wins also gave Wenger hope that he can celebrate his return to Monaco, where he made his managerial reputation as coach from 1987-94, with a famous win.

"We now go to Monaco, come out of a big week, played at Manchester United, played today a derby. We have a little belief," he said after the West Ham win.

To get past Monaco and keep English hopes alive in the Champions League, Arsenal will have to do what no other side has managed in the UEFA Champions League era — win having gone into an away tie needing to score more than once to avoid elimination.

Wenger's upbeat comments, however, were echoed by Welsh midfielder Ramsey, who is back to near his top form after returning from a third hamstring injury of the season.

The key man for Monaco could be their goalkeeper Danijel Subasic

"We need to score goals. So we will go there and try to score three or more goals and hopefully not concede any. That's our target and that's how we will approach it," said Ramsey, who missed the first leg.

"We had a sloppy first leg and we've made it quite difficult for ourselves but it's not over yet. We are more than capable of scoring three goals. We'll go into the game believing we can achieve that."

Monaco also go into the last 16 tie with a good win behind them, having thumped Bastia 3-0 at home on Friday.

That win left them in fourth place behind Lyon, Paris Saint-Germain and Marseille with 10 games to go until the end of the season.

Portuguese midfielder Joao Moutinho has been instrumental in recent successes and he believes that the Champions League format suits Monaco better than the stuffiness of Ligue 1 play.

"We can show our best qualities against the top teams," he said.

"Play in the L1 is very closed, very aggressive. Some teams are good technically, but others rely on the physical side, on defending and counter-attacks. It's hard to find spaces and you have to come up with different tactics to get the wins.

"No-one believed in us (in the Champions League) and yet we have really played well. We deserve to be where we are.

"I have full confidence in our side, despite our lack of experience. With the team spirit we have we can go even further and why not a repeat of Monaco and Porto in 2004."

That was a reference to the last time that Monaco made it past the last 16 stage in the Champions League.

With Didier Deschamps as coach, they went all the way to the final on that occasion before losing to a Porto side managed by Jose Mourinho.