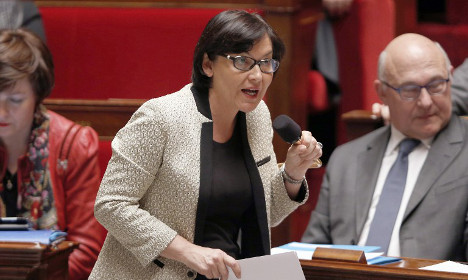 Annick Girardin, Secretary of State for Francophone Countries. Photo: AFP
Annick Girardin is one of the staunch defenders of the French language.
She works as Secretary of State for Francophone countries, and has lamented the use of English in business settings at the expense of French.
To mark International Francophone Day this week, the minister penned an open letter to "the business world".
"I have nothing against “drafting” some “to-do lists”, to “benchmark” without thinking, to establish “processes” for “conf calls” and to “forward” things with gusto," reads one part of the letter.
And she left no prisoners in the final sentence: "En attendant vos feedback ASAP pour brainstomer avec vous".
We've roughly translated her letter below but it's worth reading through the full letter in French (at the bottom of the page) to get an idea of the point she is making about how many English words are now used commonly in the French work place.
Dear the world of work:

Don’t be mad if I am a little curt with you. I wanted to share with you my feelings towards “French speaking” within French companies and organisations. As Secretary of State for Francophone countries, originally from Saint-Pierre-et-Miquelon, a little French territory in North America, I am a little “touchy” around the question of using French.

I do not ignore the contributions exchanged between the two languages and I am a fan of the idea that France is an open language, that absorbs words from elsewhere every year – a work in progress.

But, even if it’s not trendy, I deplore the fact that our French language loses so much ground in business and officialdom. You are going to say to me that this is a “has been” battle and that it’s more important to think of “cash flow” than vocabulary. But for me these two battles are not incompatible.

Businesses that choose to teach French to their teams based abroad rather than customize the language of Shakespeare in France have seen the benefits, including economic ones. On top of that our anglicisms are often incomprehensible for English speakers. Is the expression “checker ses mails” clear to someone who works in the City of London?

Outside our borders I come across French speakers who use the imperfect subjunctive as well as business English. And their first question is: “Why do you French people always give the impression of not believing in your own language?” The fifth most commonly spoken language in the world. The third language of business on an international level. One that will soon be spoken by 350 million young people in Africa – the largest potential market.

Let’s be clear. I have nothing against “drafting” some “to-do lists”, to “benchmark” without thinking, to establish “processes” for “conf calls” and to “forward” things with gusto, but I have a real feeling: This French language is a chance, an asset that needs to be exploited. Through the unique network of Institutes and “Alliances Francaises”, through its media and through digital programmes like IFos, the new platform for learning professional French.

France has precious tools to keep French alive as an international language and a language of business.

On the occasion of our “annual-review”, the International Francophone Day, I call on you to be “totally aware of the situation”. I await your “feedback ASAP” to “brainstorm” with you.

In French:
Lettre d'Annick Girardin au monde du travail publié par LeFigaro
The letter comes as a stark contrast to the words of France's Culture Minister Fleur Pellerin, who told The Local last week that France was ready to end its longstanding resistance to the steady influx of English words into the French language.
Her comments made headlines the world over, as France's legendary tough stance of defending its language against English appeared to be finally easing.