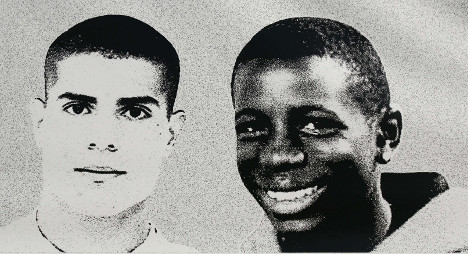 A giant picture of Zyed (L) and Bouna, the two teenagers whose death led France in 2005 to a nationwide wave of riots. Photo: AFP

Officers Sebastien Gaillemin and Stephanie Klein will face a court in Rennes on charges they failed to prevent the electrocution deaths of Bouna Traore, 15, and Zyed Benna, 17, after the pair hid from police in a high-voltage electricity transformer near their Clichy-sous-Bois housing project northeast of Paris.

Benna and Traore died in the fenced-off power facility on the afternoon of October 27, 2005 as police milled nearby. Their friend Muhittin Altun survived with severe burn injuries.

The five-day trial in the western city will examine whether Gaillemin and Klein knew the youths were in grave danger, but elected to do nothing about it.

The rioting, arson, and running clashes with security forces that broke out in Clichy after the electrocution deaths quickly spread across hundreds of similarly seething French communities, inducing much soul-searching in France, yet little improvement in the projects since.

Concerns over the darker consequences of that growing socio-ethnic split between mainstream France and its marginalised inhabitants rose higher still after the January attacks in Paris by youths who had embraced radical Islam.

The fact it took almost a decade for Gaillemin, 41 and Klein, 38, to face trial is additional proof that France's blighted "banlieues" and their residents are treated as second-class citizens whose lives — and deaths — are equally devalued, critics charge.

"Three kids were victims, two of them died in atrocious conditions. That could have been avoided, (but) the idea of acting to rescue youths who were from the projects never came to mind," charged Jean-Pierre Mignard, a lawyer for families of the victims.

Gaillemin and Klein are being tried for "non-assistance to individuals in danger" in Benna and Traore's deaths, a charge carrying a maximum prison term of years, and fines of up to 75,000 euros ($79,000).

Though Benna, Traore and Altun were all known in Clichy as well-behaved kids, supporters of their families say the trio did what project youths learn to do when police start chasing them: they ran from anticipated harassment and humiliation.

That led them into the fenced-off electrical transformers, where — according to accounts and transcripts of police radio exchanges — surrounding police discussed the fleeing youths and noted the dire consequences in the event they had sought shelter inside the high-voltage installation.

But Daniel Merchat, the lawyer for Klein and Gaillemin, says none of the evidence indicates the defendants knew the boys were in the complex and facing grave danger, yet decided to ignore it.

"My clients were never sure there were people in the (transformer). How do you want them to call for help when they didn't know anyone was in danger?" Merchat asks.

"My clients are relieved to finally get a hearing, because they are certain they did nothing wrong, committed no error," Merchat says.

The Rennes trial is the result of an October 2012 judicial decision ordering the case to court after numerous earlier rulings, pre-trial hearings and internal police investigations cleared Gaillemin and Klein of error or negligence in the tragedy.

Yet that very laborious process, Mignard says, is evidence "some people never wanted this case to be tried, (and) that almost worked."

Though the trial will finally render a verdict on whether Gaillemin and Klein were culpably responsible in the deaths of Traore and Benna, the ruling will likely be contested anew by opposing sides in the case — and in a French society as divided and antagonistic today as it was during the violent nights of October 2005.