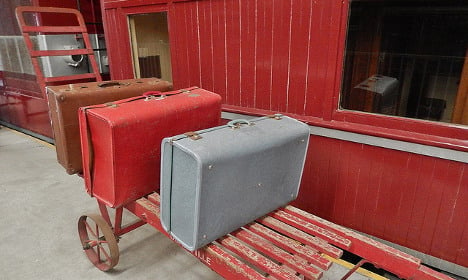 The suitcases in this photo do not include the one hiding the stowaway Russian. Photo: Michael Coghlan/Flickr

A Frenchman in his sixties really could have done with learning the rules about Europe’s borders after needlessly forcing his young Russian wife to hide in a suitcase.

The pair ended up being arrested for "attempting to avoid border controls,” Le Parisien newspaper reports.

The couple were heading to Nice from Moscow by train, but when they reached the border between Belarus and Poland, Polish border guards became suspicious about the size of his luggage.

Suspecting he was trying to hide something, officials asked the man to open his bag.

Perhaps expecting to find drugs or gold bars, the border guards were stunned to see a young, and presumably incredibly lithe woman pop out of his suitcase.

“It was the Russian wife of the owner of the bag,” said Dariusz Sienicki, spokesman for Polish border guards. “She was in good shape and wasn’t in need of any medical attention,” he added.

Apparently the Frenchman thought that his Russian wife, who was in her thirties, would not be allowed to cross the border into Poland, so although she had sat beside him for most of the journey, he suggested she wriggle into the suitcase at the frontier so she wouldn’t be found.

But it turns out she risked an onset of serious cramp for nothing.

“If she had travelled sitting next to her husband, she would have gone through smoothly,” said the border guard.

Non-EU citizen spouses are allowed to enter if they can prove their marital ties, so that families can stay together.

Instead the couple had risked "a three-year jail sentence because of their attempt to evade border control," he added.

"This was the first time I've seen someone travel like this. She very well could have been a victim of human trafficking."

The couple were released after questioning and returned to Belarus. Their whereabouts are unknown.