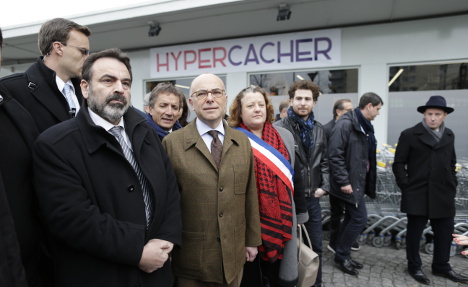 French Interior Minister Bernard Cazeneuve (2nd left) was among those attending the reopening of Hyper Cacher on Sunday. Photo: AFP

"We were stunned by the attack, but there was never any question that we would re-open," said one of the managers of the Hyper Cacher store, Laurent Mimoun.

Four Jewish men were shot dead at the supermarket by gunman Amedy Coulibaly on January 9th, two days after brothers Cherif and Said Kouachi killed 12 people in an attack on the Charlie Hebdo offices.

French Interior Minister Bernard Cazeneuve attended the reopening of the shop, which has been repaired after suffering heavy damage during the assault by special forces to kill Coulibaly and free the staff and shoppers he had taken hostage.

"You can see the layout…, you see the difficulties there were in the intervention," Cazeneuve said after visiting the scene of the drama, including the cold storage room where several hostages, including one with a baby, managed to hide from Coulibaly.

A new team of staff is working at the kosher supermarket, while employees who survived the bloody attack are free to decide "their new posting in one of the group's stores," the management said.

"With this reopening, we once again reaffirm that life will always be stronger than barbarity," the management of Hyper Cacher said in a statement.