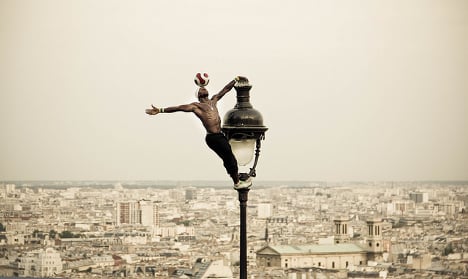 Iya Traoré at Montmartre. Photo: Patrick Müller/Flickr
Football has always been a passion for the 28-year-old Iya Traoré, who grew up watching his idols Maradona and Ronaldinho on TV in his native village of Kebeya, in Guinea, west Africa.
After arriving in Paris in 2000 to study, Traoré pursued his dream of becoming a professional footballer and set about trying to convince some of the city's football clubs to sign him up.
After several stints with junior league clubs, the capital's most prestigious club, Paris Saint-Germain, asked him to join their under-18s team. It marked the opportunity of a lifetime for the footballer, especially given that his idol the Brazilian superstar Ronaldinho was playing at the club at the time.
"This is where I met Ronaldinho who was playing with the professionals. It was great being in the same club as the person I had watched on TV in Africa," he told The Local. The artist mastering the art of kick-ups. Photo: Laurent PCB/Flickr
"I would have never imagined being part of the same team as him."
When the club let him go a year later, and when his "300 application letters" to other clubs fell through, he carried on working in his father's shop in Paris.
But his love of football stayed strong, and he took a ball to the Eiffel Tower and started doing kick-ups or keepy-ups in front of tourists, who would demonstrate how impressed they are wit his skills by leaving tips in his hat.
"I was taking my ball to go to the Trocadero square and the Eiffel Tower, and while I was there I was having fun with my ball, balancing it on my head… This is when I noticed that tourists from all over the world were taking pictures of me," he said.
He then decided to visit other spots in the City of Light such as the Champs-Elysées and Notre-Dame de Paris, where he continued to hone his technique, work on his skills and develop the kind of strength and balance that allows him to hang from a lampost with one just hand while all time keeping tight control of the ball.
Eventually, he "settled down" in Montmartre in northern Paris, and his show, performed on a plinth at the top of the steps that lead to the famous Sacré Coeur Basilica.
It makes for spectacular viewing for the crowds of tourists who gather round him, watching in awe, most of them with mobile phone in hand so they can video Traoré's routine to show their friends. They break into spontaneous rounds of applause and queue up to leave tips or ask for photographs.
"When tourists gave me pens to write my email or sign autographs, I started to use it to spin the ball on – that's when my show really started to take shape," he said.
One part of his show that tends to excite the crowd is when he climbs a nearby streetlight, all the while juggling a football on his head, feet and knees. And as frightening as it might look, he says he is yet to suffer any injuries. Traoré in action. Photo: Anroir/Flickr
"I have never been hurt. Sometimes, you have to take risks to succeed. Without taking any risks, you can’t excel."
These days, Traoré's show isn't just for the tourists in Paris. He has toured the world from Dubai to Japan, appearing on TV shows and music videos.
In fact, he says that his footballing prowess earns him a living, admitting that the "biggest earner" is when he appears in music videos, such as Shakira’s "Lalala" song for the 2014 World Cup in Brazil (see video below).
"I even did world record shows. I am the three-time kick-ups world champion," he said.
Although he admits that he wished he was playing football professionally, his passion for the sport and his love of Montmartre are plenty to keep him going.
"I will always come back to Montmartre because this is the one place where I feel the best," he told The Local.
"This is where I really feel free. I do what I want, I live well, and that’s the most important thing in life."
By Priscillia Charles