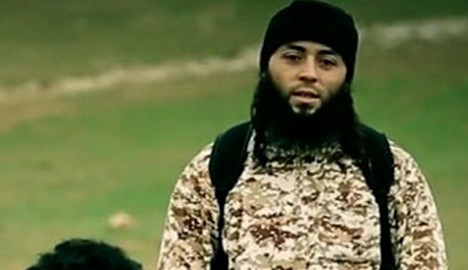 France has opened a probe to identify whether this man is indeed a relative of Toulouse gunman Mohamed Merah. Photo/AFP

According to sources close to the investigation, the man is probably Sabri Essid, who has close links to French jihadist gunman Mohamed Merah, the killer of three soldiers, three students and a teacher in southern France in 2012.

In the video, a youth identifying himself as 19-year-old Mohammed Said Ismail Musallam is shown kneeling in front of a boy who appears to be no more than 12. A man stands at his side.

Dressed in an orange jumpsuit that is standard in videos of IS executions, the man seen kneeling recounts how he was recruited by Israeli intelligence, a claim denied by his father.

The man standing nearby, speaking in French, issues threats against Jews in France, before the boy walks around in front of the hostage and shoots him in the forehead using a pistol.

The boy, who shouts "Allahu Akbar" ("God is greatest" in Arabic), then shoots the man four more times as he lies on the ground.

There is a "strong possibility" that the French-speaking man in the video is Essid, 31, several French sources have said, although they acknowledge it is difficult to prove given the lack of concrete evidence such as DNA.

Known to intelligence services as a key figure in the radical Islamist community in the southern city of Toulouse, Essid is suspected to have left France for Syria last year.

He had already been caught in December 2006 in Syria in a house known to shelter Al-Qaeda members on their way to Iraq.

He was sent back to France and was sentenced in 2009 to five years in jail, including one year suspended, in a case involving an Iraqi jihadist network.

His father had lived with Merah's mother, and Essid was close to the killer and his brother Abdelkader.