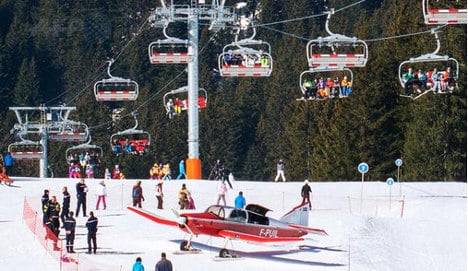 A Polish skier was hit a plane on a ski slope in the French Alps on Thursday. Photo: AFP

Skiing can be a hazardous sport but there are certain things you don't expect in danger of when taking to the slopes in the Alps, like being hit by a plane for example.

But that's what happened on Thursday in the plush ski resort of Avoriaz, when a Polish skier was lucky to escape with her life.

A light aircraft made an emergency landing on a French Alps ski slope Thursday, just missing a group of children but clipping theskier, nearly severing her hand.

"We only narrowly avoided a catastrophe," said a source at the firefighters, who declined to be named.

Plane crashed into the slopes in #Avoriaz injuring a skier pic.twitter.com/GbYSEsaOPZ

"The plane passed under the ski lift, just missed the trees and then a group of children before touching down on a blue run on which the woman was skiing," the source added.

She was immediately rushed to a local hospital, by helicopter. She suffered a "near amputation" in the incident, according to emergency services.

"The plane suddenly appeared behind her and there was virtually no sound. She didn't hear it," local public prosecutor Patrick Steinmetz told AFP.

A plane landed on a slope this morning in #Avoriaz after aborting it’s takeoff! pic.twitter.com/ZitBYR2mV4

Accompanied by one passenger, the pilot made a stopover in Avoriaz, close to the border with Switzerland, and was about to depart when the accident occurred.

The pilot was "a professional who is used to these kind of conditions" on take-off, Steinmetz said.

The prosecutor's office was investigating the accident.

The plane, which was surrounded by safety nets, was to be moved Thursday night, and the ski track closed until the end of May.

Avoriaz is located close to the border with Switzerland and was recently judged the most expensive resort in the French Alps.