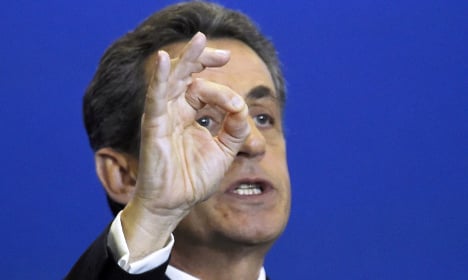 "It's my party and I'll change the name if I want to". UMP leader Nicolas Sarkozy. Photo: AFP
There's about to be a new party on the French political scene. Well, a new name at least.
The French opposition party UMP (which stands for "Union pour un mouvement populaire" or "The Union for a Popular Movement" in English) will soon be rechristened as part of Nicolas Sarkozy's plan to shake up his party ahead of the 2017 elections.
On May 30th the former president will reveal exactly what that party will be called, but UMP sources from French channel Europe 1 radio on Thursday suggested the party's name will be "Les Républicains."
The news site noted that another favourite had been Le Rassemblement, or "The Gathering" in English.
As the name makeover will have to be agreed upon by the party members, it remains uncertain as yet whether the name will actually change, but Sarkozy has already promised that his party will come out swinging with a new look regardless.
He said that the party will be "much larger, more unifying, and more dynamic" in a recent interview with French newspaper Le Figaro recently.
Since being booted out of power the UMP has been beset by scandal, notably when its president Jean-François Copé was charged with “abuse of finance” as part of a police probe into allegations that €10million worth of invoices from Sarkozy’s 2012 campaign were passed off as UMP party expenses.
The party also descended into in-fighting after a bitter leadership battle between Copé and François Fillon was marred by accusations of vote-rigging on both sides.
Bruno Bernard, a former ministerial advisor for the UMP told The Local on Thursday the name change is all about about Sarkozy's attempts to change the image of the party after that series of scandals.
"The party needs a fresh start or it feels like that anyway. The name change is more something that the Sarkozy supporters want than the hardcore members of the party," said Bernard.
"It's like they are saying 'we have the same man in charge that we've had for 10 years, we have no new ideas, so let's come up with a new name'."
Bernard says the name of the party "Les Republicains" is inspired more by the typical French values like secularism (laïcité) rather than their political namesakes from across the Atlantic.
"I don't think it's inspired by the US political party. It's more to do with the "Republican" identity in France and the "Republican ideals" which have become more significant in the light of the Charlie Hebdo terrorist attacks.
"Sarkozy wants the UMP to be the party that embodies those Republican values," said Bernard.
"Especially since they have been accused multiple times for being "un-Republican" because of the fact they have leaned so close to the far-right National Front at times."