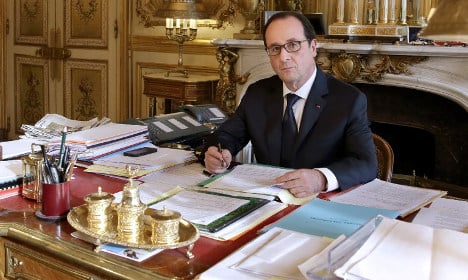 President Francois Hollande at his cluttered desk. Photo: AFP
French President Francois Hollande's desk came under scrutiny this week after a photoshoot revealed that his desktop was invisible due to mountains of paperwork.
The photo was published in Challenges magazine and caught the eye of the Rue 89 website.
Alongside the image of France's President Francois Hollande, the paper noted two surprises.
"There's not a computer screen in sight," it noted, "and there's a spectacular display of papers, files, folders, and just one little touch of modernity – a smartphone."
Anyone who's spent more than five minutes in France will recognize the masses of paper as absolutely nothing out of the ordinary for the nation, where even a new bank account comes with a small novel of fine print.
One of the commenters below the article joked: "With all that mess we can understand why Hollande forgets to keep his promises… they're buried under a pile of papers."
The photo prompted Rue 89 to wonder how Hollande's cluttered desk, compared to those of other world leaders.
The site noted that it was in stark contrast to that of US President Obama, who is seen standing behind a noticeably clearer desk. (Photo: AFP)
Rue 89 made particular note of the telephones on the desk (joking that one of the buttons was surely there to avoid a nuclear war) – and also pointed out the "Starbucks style" takeaway coffee mug (not in the image above).
"Typically American," the site noted.
Other leaders to get the review included the "clutter free" desk of German Chancellor Angela Merkel ("finally a computer screen"), Russia's "well-connected" President Vladimir Putin, South African president Jacob Zuma on an iPad, and the colourful office of Brazilian President Dilma Rousseff. (Photo: AFP)
CLICK here to see how Hollande compares to other world leaders.