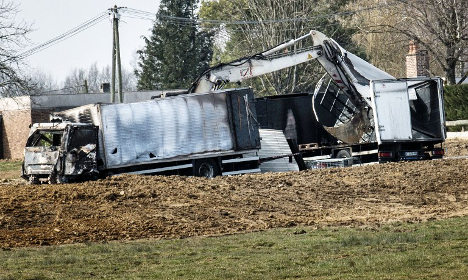 A group of "battle-hardened" armed thieves attacked two heavily guarded vans carrying jewels at a French motorway toll in the dead of night, making off with a haul worth some €9million ($11 million), police said on Wednesday.

Security forces were working to find those behind the heist, which took place around midnight on a motorway in the Yonne district some 200 kilometres (125 miles) southeast of Paris, searching within a large perimeter around the area and under the watch of air support.

A police source, who wished to remain anonymous, said there were around 15 robbers, all "heavily armed and battle-hardened."

No one was hurt in the holdup and the Avallon toll booth itself was not damaged, prosecutors and the firm managing the motorway said, suggesting the work of professionals.

The vans were found burnt and abandoned in a field not far from the toll station, and it was as yet unclear exactly how the assault unfolded.

Attacks on armoured vehicles carrying jewels or cash often require special equipment such as explosives or assault rifles, and while they occurred regularly at the beginning of the 2000s in France, they have dwindled in recent years.

The last major such heist was in 2009 when armoured van driver Toni Musulin escaped with his vehicle after two of his colleagues stepped away, making off with at least €11.5 million in cash collected from a Bank of France building.

Musulin became an overnight Internet sensation at a time when the super-rich were being blamed for the financial crisis.

Investigators soon found packets of cash totalling €9.11 million in a lock-up garage in the southeastern city of Lyon near where the abandoned van was found, and after some ten days on the run, Musulin gave himself in.

The rest of the cash was never found.

When it comes to jewellery, the country's most spectacular heist was a double robbery at a Harry Winston shop in an upmarket part of Paris in 2007 and 2008.

The thieves had spent the night in the jewellery shop with the help of a security guard at the store, who let them in the previous evening.

The robbers made off with 120 watches and 360 pieces of jewellery worth more than €32 million.

Then just over a year later, in December 2008, four men — including three wearing women's clothes and wigs — entered the same store, again with the help of the guard.

Last month, eight men were sentenced to up to 15 years in jail for their role in the double heist.