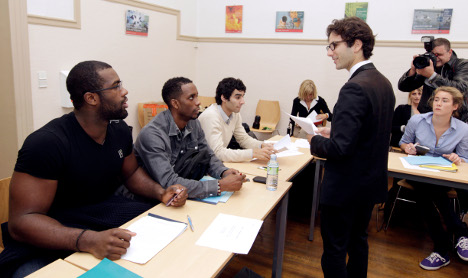 Students at a Paris university. Photo: AFP
A league table of the world’s most prestigious universities published on Wednesday showed that France boasts five institutions in the world's top 100 – up from two in 2014.
“We can't say exactly why more French universities made it in as it's a subjective poll,” Phil Baty, editor of Times Higher Education Rankings, told The Local.
Over 10,000 academics from 142 countries were polled, giving their opinions without being asked to justify them.
“But no matter the reason, this is a dramatic improvement for France. Five universities in the top 100 is extremely impressive – this is the elite of the elite. There are 20,000 universities in the world,” he added.
While the motivation of subjective respondents is near impossible to monitor, Baty said a reason France could have seen such a drastic change is the fact that the survey had a wider spread of respondents this year.
“We had a more balanced sample this year that was more representative of the spread of the world's higher education, including responses from more European and French scholars,” he said.
The researchers noted that despite France's “excellent” results, it “must be a cause for concern” that all five universities were located in or around Paris.
“It's a brilliant asset to have five world-class universities, and it really puts France on the map. But there is an issue when it comes to the universities' geographic setting,” Baty explained.
“We're seeing a similar debate in the UK right now, where a lot of the student population flood to the south east of the country. It makes you wonder: If everything is focused on one city, will the rest of the country suffer from a relative lack of prestige, and will that be reflected in economic growth and job attraction?”
Nevertheless, the Times Higher Education 2015 World Reputation Rankings singled out France for its “strong” year – led by Pantheon-Sorbonne University – Paris 1 and Paris-Sorbonne University – Paris 4, which both ended up in the 51-60 band.

In explaining the ranking, Baty said the research was vital.
“A university’s global academic reputation is vital – it not only influences investments and funding decisions, but more importantly, it helps a university to develop and nurture its single greatest asset: its student and academic talent,” he said in a statement.
The news comes hot on the heels of an excellent ranking of Paris as a student city from November, with the French capital ranked as the world's best student city for the third consecutive year.
But it isn't all good news. Another study from The Times in October showed that only two French universities made it into the top 100 of a global quality ranking. Baty told The Local at the time that France had a problem with branding and a lack of research in English.
Of the world's top ten universities by reputation, the US could lay claim to eight of them, led by Harvard. The UK snagged positions two and three respectively with Cambridge and Oxford, followed by Massachusetts Institute and Stanford University.