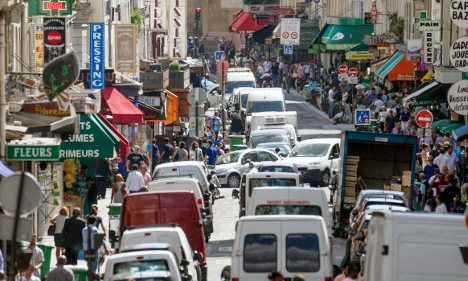 Traffic in central Paris is usually heavy, to say the least. Photo: AFP
Paris, the capital of France, otherwise known as the City of Light.
But perhaps it's more appropriate to refer to it as the City of Noise?
With ambulances screaming through the streets, garbage trucks pummeling the roads left and right, and motorists always eager to honk their horns – Paris is not a city you would come to for a bit of peace and quiet.
Indeed, a recent study found that 86 percent of Parisians are concerned by the noise levels.
And it's not just in France. The European Environment Agency found that the continent's noise pollution is so significant that it contributes to 10,000 deaths a year – mostly through heart attacks.
The Council of Paris (Conseil de Paris) is now launching measures of its own in a bid to turn down the volume on Paris, where around 200,000 people are believed to be exposed to potentially hazardous levels of noise.
Among the measures, which are set to be implemented between 2015 and 2020, is a reduction in the speed limits in certain streets to 30 kilometres an hour, cutting back on the number of streets that trucks can use, and adding an “anti-noise coating” to the Paris ring road – the Périphérique.
The coating would reduce the noise by three decibels, the equivalent of 50 percent less traffic.
The move would also see an awareness campaign launched to teach drivers how to use their horns more sparingly, something which the city's motorists are notorious for.
The full list of 34 measures will be announced on Monday.
But some people in Paris believe the city could do with being a whole lot noisier. Especially at weekends.
In certain neighbourhoods in the city, notably the 11th, which is popular among students, local residents and Town Hall officials have been involved in regular clashes with bar owners over late night noise.
Authorities have been known to crack down hard and have forced many popular hangouts to close for lengthy periods of time in a bid to teach them a lesson.
Revellers however say the restrictions have left Paris nightlife lagging behind that of other cities in Europe.
In 2013 Clément Léon the city's first “nightlife mayor” was appointed and vowed to come out fighting on the subject of noise pollution
“People want certain surroundings, but not the life that goes with it,” Léon said at the time.