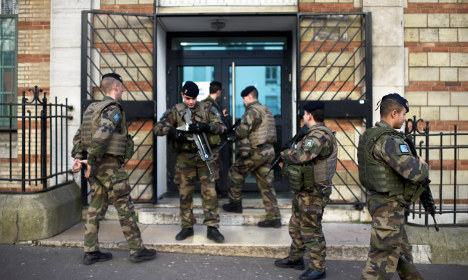 Troops outside a Jewish in Paris, where they will likely stay for weeks to come. Photo: AFP
"The threat of terrorist attack against our country remains high," the office of President Francois Hollande said in a statement after a special meeting of top ministers.
"The head of state has decided to maintain the level of the army on the national territory at 10,000 troops in support of security forces from the interior ministry."
It added that "7,000 of them are deployed primarily for surveillance and protection at religious sites that are particularly threatened".
Soldiers have also been patrolling stations, media buildings and other potential targets since the jihadist attacks in Paris in January that left 17 dead.
Defence Minister Jean-Yves Le Drian later told reporters that the troops would remain deployed at least "until the beginning of the summer."
Since the attacks, there have been scores of incidents directed at both France's Jewish community and the Muslim community. (Ile-de-France and Alpes-Maritimes will remain on high alert for months. Photo: AFP)
The country’s anti-terror alert system, known as Plan Vigipirate, will remain at “attack” level for several months in Ile-de-France and in the Alpes-Maritimes region around the Riviera, authorities announced last week.
The cost of the anti-terror system has been astronomical – and stood at €940 million last week – but it has also seen a drop in the number of burglaries and thefts across the country.
Despite the heightened security, some union bosses have flagged their concern that long days standing still could lead to fatigue among the troops.
"The men are tired and this fatigue keeps accumulating," Jean-Hugues Matelly, head of the GendXXI professional association representing France’s military police, told Europe 1.
"The risk is that this will lead to a lack of vigilance, which means that when a real attack comes we are not reactive and therefore unable to stop it."
He added that fatigue could lead to complacency, which could have "dramatic consequences for the public" considering how heavily armed the men are.