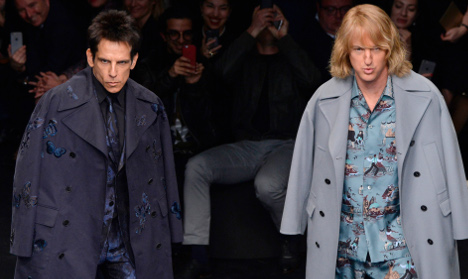 Ben Stiller and Owen Wilson bring out the Blue Steel look. Photo: AFP
US actors Ben Stiller and Owen Wilson, the stars of the 2001 movie "Zoolander" that poked fun at the fashion world, raised the roof when they stepped back into their comic roles at the end of Valentino's real-life autumn-winter women's collection.
Stiller even recreated the trademark "Blue Steel" surprised duck-face look of his Derek Zoolander character for the chuckling photographers gathered at the venue in the gardens in front of the Louvre museum. For the record, Stiller was impeccably dressed in a dark marine suit with tie overlaid with a dark wide-collared overcoat embroidered with butterflies, and black shoes.
Wilson turned up in light blue pyjamas, a sky-blue coat draped over his shoulders, and sneakers.
Both men stepped out in confident male-model mode, to pose in front of the cameras, then headed off the catwalk while dropping their overcoats in a perfect parody of supermodels. Stiller paused to grab a spectator's smartphone and take a selfie on stage.
The unexpected stunt was to promote the "Zoolander" sequel, which is due to come out early 2016.
Check out the video from the catwalk below.