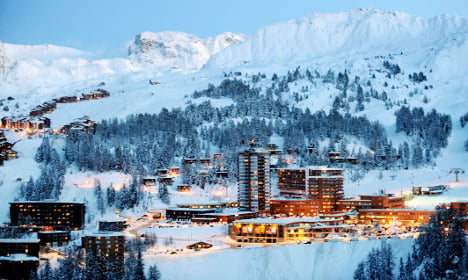 The La Plagne ski resort. Photo: AFP
"There are three entries for La Plagne in France, and I selected the wrong one," the driver told Studio Brussel radio, the youth channel of publicly owned VRT, which organised the failed holiday.
Rather than head to the Alps, the bus driver took the road leading to La Plagne village in the south of France near Spain, some 600 kilometres southwest of the ski resort.
"We saw the Mediterranean and Carcassonne," a passenger said on Twitter, referring to a southern town known for its medieval fortress.
The bus driver turned back at Toulouse, and the holiday-makers reached their destination in the Alps 24 hours late.
The tourists' Studio Brussel hosts greeted them with Spanish cuisine specialty tapas, though some travellers said they were happy to have made the surprise bus journey.