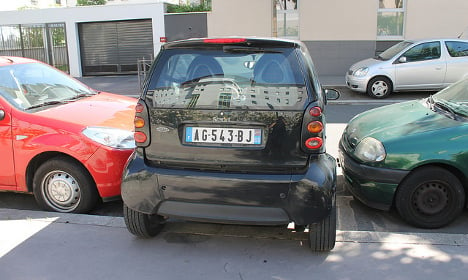 Parking in France can get rather creative. Photo: Connie Ma/Flickr
French author Michel Le Goff has just published a new book called The French Nightmare. In it he takes aim at his own country and its people in a bid to break the myth that anyone who moves here is in for an idyllic life.
“My wife is a foreigner and she wanted to move home after three days,” he tells The Local.
“It's always a shock to see the difference between what people say about France when they visit and what people say about it when they live here,” he adds.
Here is a taster of what he considers the worst “nightmares” about France and the French, in descending order.
10: Giving birth (when you don’t speak French)
When push came to shove, my wife and I couldn’t find an obstetrician who could speak English. And because French hospitals lack funds and staff, they sometimes recruit workers from funky countries, which was the case for our anesthetist, who had to perform four epidurals on my wife. After failing in his fourth attempt, he decided to put her to sleep. Overall, it took eighteen hours of painful labour before my wife could deliver our baby, and I had to act as an interpreter the whole time. Do you want to know who was the only person who spoke good English in the maternity? The cleaning maid.
9: Internet (No internet today. Photo: Marcelo Graciolli/Flickr)
I have heard so many times our successive ministers of culture or digital economy saying that our internet services are the best of Europe. Is that so? My internet service provider is France’s most notorious ISP, and I can assure you that my connection fails me almost every day. When it works, it is only at the stunning speed of 8 megabytes per second. Streaming any live show is out of question and talking through Skype takes us back to how things were in 2005 when we were still using MSN live.
8: “C’est comme ça.”
“C’est comme ça” means “this is how it is”, and it is a very common expression in France. Teachers say it to their students when they ask a question that's too complicated, politicians use it when they don’t have anything to say, and it is the administration’s favourite catchphrase.
My favourite “c’est comme ça” experience? That was when I went to the Versailles préfecture to get an international driving license. The website said they were open from 2 to 4.30pm. I went at 3pm and the lady at the counter ignored me. After I said four “bonjours”, she finally told me the prefecture was closed. I replied that the outside signs and the website said that they should be open until 4.30pm. All I got was a very sharp “oui mais c’est comme ça.” That’s how it is.
7: Smoking (A man takes a cigarette break in front of the Louvre museum. Photo: G Morel/Flickr)
If you don’t like smoking, then France is not for you. Half of the adult population smokes, and most of them don’t care if you are disturbed by their poisonous fumes because they think it is their freedom to ruin your life. It is very common to see pregnant women smoking, or parents who push their baby's stroller with a cigarette in hand – and the tobacco ban within public places is not always respected. Beware.
6: Drugs
“Ignorance is bliss”. This expression has never gotten any better than now, especially among cannabis users. In France, among the 32 percent of the adult population who smoke weed, there is a fair chunk of them who believe that drinking a glass of wine is more dangerous than smoking a joint.
France is a wine country – and there are people who say that one of France’s key products is a danger for public health? Do we really need to compare the effects of a glass of wine compared to the effects of a joint to the brain? But even if you come up with the most rational arguments to explain the dangers of the consumption of cannabis, its addicts would still praise it by saying that it is actually a good therapy for almost each and every single ache of this world. Let me tell you, the wine industry has tough times coming ahead.
5: Parking in Paris (Anything goes when parking your car in France. Photo: Torger Kvalsund/Flickr)
Paris is home to 2 million out of the 12 million inhabitants of Greater Paris, yet every day, millions of people go to Paris to work, and many of them don’t have any other alternatives than taking their car. This is something the last two socialist mayors have failed to understand. Last year, thousands of parking spaces have been removed, replaced by bicycle lanes or electric car stations, and the price for parking in the streets of the French Capital has risen to €4 per hour.
It is now possible to circle around blocks of buildings for hours before being able to find a place to park. It actually happened to me several times that I had to go back home instead of joining my friends for partying in Paris just because there was nowhere to park. You might say that people could take public transportation, but good luck finding a metro running after 1am.
4: Motorcyclists (Scooters and motorcycles are everywhere you look in France. Photo: Benjamin Stäudinger/Flickr)
Nineteen percent of the people who die every year on the roads are motorcyclists. Why? Because they like to slalom between cars, drive between lanes, drive on the wrong side of the road, and they think that speed limits don’t apply to them. Of course, if you do anything to annoy them, like not giving them enough space while you are stuck in the traffic, they will give you a rude gesture with their middle finger or worse: scratch your car with their boots. Charming!
3: Ridiculous taxes
Did you know that in France, self-employed people can pay up to 70 percent of their revenue into taxes? There was also a 75 percent tax rate on any money you were making above one million euros per year. It doesn’t make you really want to work hard, non? But France also invented a new kind of tax: the tax that makes less money than what it costs to process. This included taxes as ridiculous as the pinball tax.
2: French Educational System
Seriously, if you look at France’s latest Pisa rankings, the country shows up at a most mediocre 24th place behind… Vietnam. Could this be because of the high amount of weed smokers among teenagers or is it because teachers get recruited low entry level exam scores? I don’t know, but what is for sure is that it is not going to improve anytime soon.
1: Strikes and demonstrations (Teachers on strike in Paris. Photo: Andrew Ross/Flickr)
This is the number one problem in France. Just as I am writing this, there is another train strike happening in Paris. There is a strike or a demonstration almost every day and for everything. Garbage collectors, students, air controllers, truckers, teachers, even pharmacists and doctors, lawyers and judges. I mean…it’s OK to be allowed to strike, but unions abuse the system so much that it has become a problem for the country’s competitiveness because it makes France fail to adapt to the new challenges of today’s world. Wake up, guys, this isn’t 1968 anymore.
Michel Le Goff
Find out more about Le Goff's new book, The French Nightmare, here.
Readers do of course have a right to reply in the comments section below: