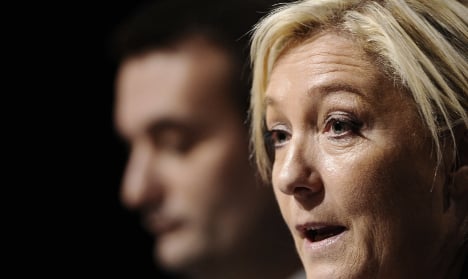 National Front leader Marine Le Pen. Photo: AFP
She said the decision was orchestrated by France's socialist prime minister Manuel Valls and EU parliament president Martin Schulz, a German socialist, ahead of French local elections this month.
The European Parliament announced on Monday that Schulz had formally notified the European Anti-Fraud Office (OLAF) to possible financial irregularities committed by the party over salaries paid to the assistants of euro MPs.
"It's a huge political manipulation," Le Pen, who is herself an MEP, told reporters at the European Parliament in Strasbourg, France.
"We have nothing to reproach ourselves for, in this or any other area."
The National Front — the leadership of which Le Pen took over from her father Jean-Marie Le Pen in 2011 — is leading in the opinion polls ahead of local elections in France on March 22 and 29.
Marine Le Pen is widely expected to run for the French presidency in 2017.
Accusing her opponents of targeting her party, she went on: "Mr. Schulz, who is a socialist, on instruction from Mr. Valls… fulfilled his contract.
"This little political game several days before elections is starting to be a bit crude. It's the least one can say."
Schulz denied any political motivation, insisting his actions were "purely administrative".
"One cannot be paid by the European parliament and work for a party," he said.
The European Parliament said the National Front had listed 20 assistants to MEPs on its French roster — even though under parliamentary rules they are only supposed to perform work directly linked to the work of the MEPs.
A parliamentary source said the claims in question totalled €7.5 million euros ($8.1 million).
The National Front, which wants to renegotiate European treaties and wants Paris to leave the eurozone, won 23 seats in the European Parliament in May after coming first in France's European elections.