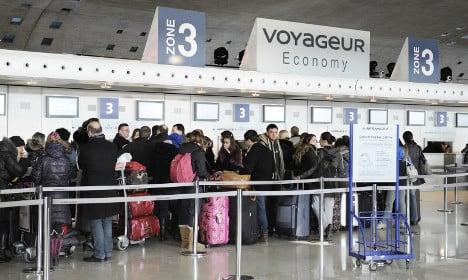 People queuing to leave France at the Charles De Gaulle airport in Paris. Photo: AFP
There are 2.5 million French "expats" living around the world – more than twice as many as there were 20 years ago.
And with an economy that's struggling to show any signs of life, can you blame them for looking elsewhere for better options?
A new study carried out for Le Petit Journal by French firm Humanis, which works with expats, has revealed that two thirds of French expats don't plan on returning home within the next five years, citing a more attractive professional life abroad.
And foreign employers are lapping up the chance to work with the French.
"French people are considered to be productive, well-trained, and adaptable," founder of Le Petit Journal and expat expert Hervé Heyraud told French newspaper Le Parisien.
He noted that 20 percent of French expats were earning salaries between €36,000 and €60,000 per year, compared to the French average of €29,000.
Six out of ten respondents to the survey said it wasn't just about professional life, citing a negative image of France as another reason not to hurry home.
READ ALSO: A closer look – why we're leaving France Parisian Pierre Cy works for a vintage Scandinavian design Gallery in Stockholm, where he has lived for four years and told The Local there's a wealth of reasons as to why he left Paris.
"France is glorifying its past and is scared of changes," he said.
He says that the political leaders are "disastrous" and aren't "in touch with the world of today", adding that there is "a lack of mutual respect and fraternity among people".
But it's not all ill-will from the Parisian.
"I miss France for its culture and its beautiful countryside. I miss the food, the wine, speaking French, and the diversity of the population of Paris. Maybe I'll come back, but it won't be in the next two years, at least," he says.
Another French expat named Farida, who is plying her trade as an artist in London, vowed she will never return to France.
"In the UK you don't feel as though your dreams are limited. People don't say to you, 'you can't do that because you don't have the right education' or 'you don't have the money to do that'.
"It's a different mentality. Yes France has social benefits but it feels like the French have become dependent on the state for help," she said.
One of those benefits that the French expats do miss however is the health service, with around 70 percent of those surveyed said they missed France's healthcare system and the social protection.
The average French expat is 48 years old, 58 percent likely to be a woman, and most probably living in Europe (with 45 percent living elsewhere). Three in four are married, 52 percent don't have children, and one in two can boast an annual salary of above €36,000.

PARTNER CONTENT
Six reasons why international health insurance could give you peace of mind – now and in the future
Url copied to clipboard!