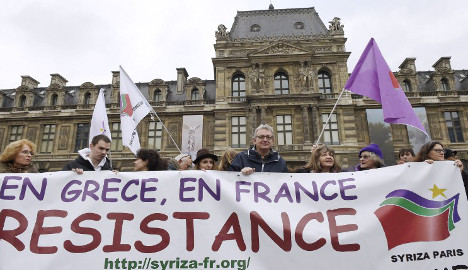 Did France get treated more leniently by Brussels than Greece? Photo: Loic Venance/AFP

European finance ministers on Tuesday approved a controversial two-year extension for France to get its deficit within the bloc's limits, despite accusations that bigger member states are treated more leniently than smaller ones.

They formally accepted assessments by the European Commission, the executive arm of the 28-member European Union, of the national budgets of member states including the reprieve for France.

"France needs to step up its efforts both on fiscal and structural reforms… We are putting France under tight deadlines," European Commission vice president for the euro Valdis Dombrovskis said after the ministerial talks.

In its decision announced in late February, the commission gave France until 2017 but ordered it to report back on reforms in three months, after deeming that commitments pledged by Paris fell short.

France was accorded the extra two years to work down its public deficit  — the difference between government spending and revenue — from 4.0 percent of annual gross domestic product in 2015 to 2.8 percent in 2017.

But the warning ignored demands by some European officials for France to be called to task as a repeat offender of the EU rule that national deficits not exceed 3.0 percent of economic output.

France has received several extensions in recent years to meet the rules, and a key official at the European Central Bank warned that the rules were being undermined with major economies treated more leniently than smaller ones.

"It's always extremely important in Europe to avoid a situation — or even to avoid the perception — that large countries are treated in a more benevolent way, in a more generous way, in a more flexible way than smaller countries," ECB executive board member Benoit Coeure told the Financial Times.

Some smaller countries have made their frustration known, with bailed-out Ireland on Tuesday asking for the same flexibility terms offered the much more powerful France.

"I supported the commission proposal, including the extension to France… but I used the opportunity to say that we needed the flexibility in the application of the rules as well," Irish Finance Minister Michael Noonan said after the talks, according to the Irish Times.

Germany, the EU economic powerhouse that pushes for balanced budgets, refrained from overtly criticising France and also approved the extension, but not without issuing a warning.

"If the commission is too flexible on the growth and stability pact (budget rules) for political reasons — it has to be aware there will be consequences," said Wolfgang Schaeuble, Germany's influential finance minister.