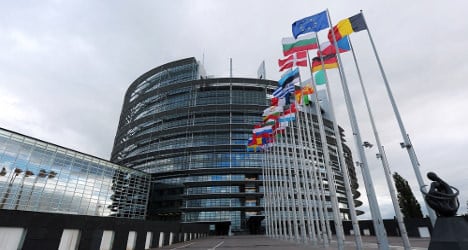 The EU parliament in Brussels has asked the fraud squad to investigate the National Front. Photo: AFP

In a statement the Parliament said its president Martin Schulz had informed the European Anti-Fraud Office (OLAF) of the suspected fraud, which a parliamentary source said totalled 7.5 million euros ($8.1 million), confirming figures given by French daily newspaper Le Monde.

The statement stressed that assistants receiving wages from the European Parliament must work "directly" for Parliamentary MEPs.

"It is not for Parliament to draw conclusions, it is the OLAF to decide in its capacity as the EU anti-fraud agency," stated European Parliament spokesman Jaume Duch.

National Front head Marine Le Pen announced on Twitter her intent to file a complaint over the "false accusation".

"Basically, Schulz is right… our assistants do not work for the European Union but against it," FN vice president Florian Philippot tweeted, underlining his party's political stance, while adding that the case was "bogus".

OLAF must now decide whether or not to open an investigation, a process which could take several months.

French Prime Minister Manuel Valls warned Sunday that the FN could win the next presidential election in 2017, saying their policies were a "disaster" for the country.

Polls showed that the FN could win an "unprecedented" score in forthcoming local elections on March 22 and 29, Valls said.