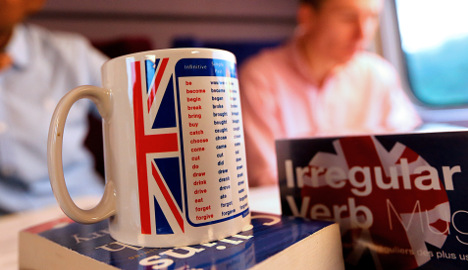 Will French school pupils learn less English in future? Photo: AFP
The French don't have the greatest reputation when it comes to their level of English, with one survey published in November last year ranking them bottom of the whole of the EU.
But the government doesn't seem too concerned if its planned reform is anything to go by.
The ministry of education is set to reveal a new set of reforms on Wednesday in which it is expected they will push for pupils to come out of junior high school (collège) having learned two foreign languages.
Ministry officials hope to make this possible by starting additional language lessons from the fifth grade, when the pupils are aged 12-13, a full year earlier than in the current system.
But the new plans could come at a cost for the pupils – with the ministry likely to remove time from the English learning schedule. At least that's what other schools have done in trials in order to make timetable ends meet, reported radio station Europe 1.
One parent interviewed by the station said the idea seemed promising.
"One year extra to learn a second foreign language is a good idea," they said.
Another added: "The earlier they learn this kind of thing, the better."

If the reforms are passed, they will come into effect in 2016.
However for those who want the French to improve their English level, the idea is unlikely to go down well.
November's damning report by international language training company Education First, blamed France’s poor result on the “limited education reforms on language instruction” as well as the teaching quality in the public education system.

As a result, only children whose parents are able to afford trips abroad, tutoring and private schools are able to achieve a high degree of English proficiency, the report said.

It also blamed France for being too protective of its own language.

“Improving the country’s English skills is not a subject of national debate,” the report said. “If anything, public debate is aroused only when it is proposed that English take on a small measure of official importance.”