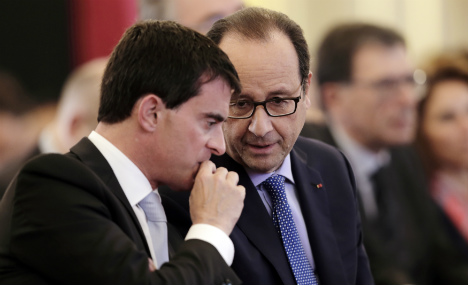 "Do you not think that a FN which wins 25 percent in European elections and maybe 30 percent in local elections… cannot win the presidential election?" Valls said on French television channel iTele.

Polls showed that the FN could win an "unprecedented" score in forthcoming local elections on March 22nd and 29th, Valls said.

According to an OpinionWay survey for Metronews and LCI published on Friday, the opposition right-wing UMP party would win 29 percent in the first round of the local elections, just ahead of the FN which was credited with 28 percent of the vote.

"I am scared for my country, I'm scared that it will crack in the face of the Front National," said Valls, who warned last year that the far-right party was "at the gates of power" in France.

"Whatever happens, we have to have a much bigger turnout to make sure that the FN's score is lower," he said.

"Their political programme — to leave the euro, to leave the Common Agricultural Policy — is a disaster for the country, it's ruin for the French,"  the prime minister said.

The left-wing Socialist Party (PS) of Valls and President Francois Hollande were expected to perform poorly in the local elections, but the prime minister said he would "without any doubt" be staying in his job after the vote.

"I will continue the mission that the President of the Republic has given me, to reform the country," he said.