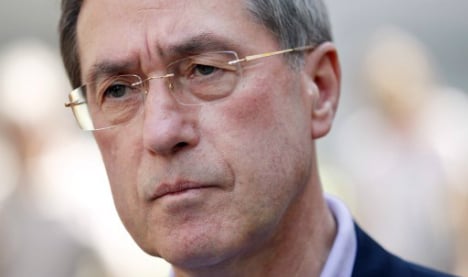 Gueant, who was Sarkozy's right-hand man for a decade, claimed the money was the proceeds of the sale of two 17th-century Flemish paintings to a Malaysian lawyer.

But art experts challenged the evidence, saying the highest price fetched at an auction by a painting by the artist, Andries van Eertvelt, was around €140,000.

Gueant spent the night in the offices of the anti-corruption bureau in Paris before police resumed questioning on Saturday morning.

A judicial source on Saturday evening said Gueant had been charged with tax avoidance as part of an organized group and forgery.

Gueant's lawyer Philippe Bouchez el-Ghozi said his client, who was questioned for 30 hours and faced "almost 300 questions that mainly focused on the so-called Libyan funding", denied any wrongdoing.

He said his client had not been charged as part of the main probe and that his case simply boiled down to "justifying the acquisition of two paintings 22 years ago" and whether they had been properly declared for tax purposes.

Accusations that Sarkozy's successful 2007 campaign was financed by Qaddafi's Libya emerged after the first round of voting in the 2012 election, when the Mediapart website published a document dating from 2006 and setting out an arrangement for €50 million to be paid to the campaign.

Sarkozy says the document is a forgery, and was backed by the former Libyan intelligence chief Moussa Koussa whose signature was on it.

The centre-right politician lost the 2012 election to Socialist Francois Hollande.