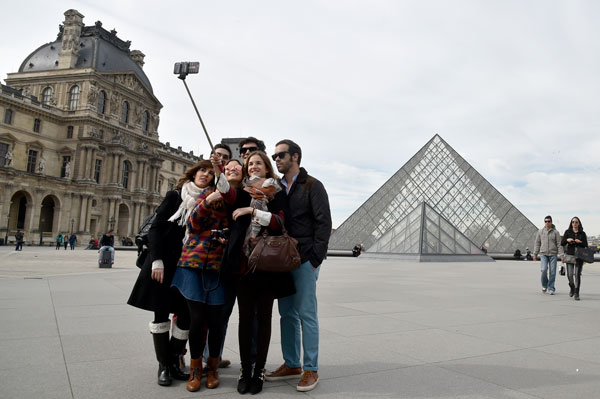 Inside the famed Palace of Versailles, just outside the French capital, guards are telling visitors to put away the telescoping rods that allow users to take a smartphone picture of themselves form a distance.

A formal rule change will soon prohibit the poles outright.

The management of the Louvre – the world's most visited museum – is watching with increasing wariness the burgeoning use of the selfie sticks being waved around within centimetres (inches) of priceless paintings.

There's no ban there yet, but "their use must respect the rules," which include not pointing objects at the paintings or sculptures, a spokeswoman said.

The Pompidou Centre, which houses modern art exhibitions, is "heading towards a ban but the decision has not yet been made," its management said.

Already several other big museums in the world have this year started banning the extending rods, including the Smithsonian in Washington, the MOMA in New York, and the National Gallery of Australia in Canberra.

The measures were taken as the use of the cheap, telescoping rods, some of which can extend to 1.5 metres in length, becomes a ubiquitous, worldwide trend. It is not unusual to see tour groups waving a forest of aluminium poles holding smartphones aloft in some high-density tourist sites.

In Paris, a ban on them inside museums would have a significant impact. The City of Light is a prime destination for fans of culture and history. Together the Louvre, Versailles, the Pompidou Centre and the Musee d'Orsay attract more than 20 million visitors per year.

Safety — for other visitors passing by in often crowded spaces and of the fragile paintings, sculptures and palace furnishings — is cited as the reason for the move against the sticks.

Many tourists seem understanding of the need for restrictions on the poles.

"I think that in shared spaces, outside like here, it (a selfie stick) is fine," said Juliana Lepoutre Garavini, a Brazilian outside the Louvre. "But in the museums I think it bothers people a little."

Alyssa Pasqua, an American visitor from Hawaii, said she uses a selfie stick but would not mind a ban inside museums – "because I feel like sometimes these things are dangerous. You can hit someone with it, because sometimes I'm accidentally like 'oh my God!'."

But Ezad Asri, a tourist from Malaysia, insisted he wanted to be able to maximise his precious time in Paris's museums.

For museum managers, finding a balance between the understandable desire of people to photograph their visit – which also generates publicity on social networks – and to ensure safety and optimum foot-traffic flow is difficult.

Paris's Musee d'Orsay, for instance, prohibits all photography inside. Many other museums permit non-flash snaps as long as no tripods or monopods are used. Almost all refuse entry with unwieldy objects such as non-collapsible umbrellas, baby carriages and bulky backpacks.

France's culture ministry has published a non-binding charter that recognises that accommodating shutterbug museum visitors is "sometimes problematic" but makes no mention of selfie sticks.