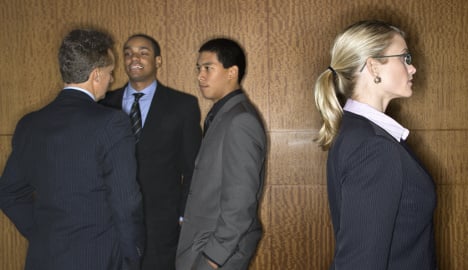 "Elle est pire qu'un homme" just one of the sexist terms women in France are victims of. Photo: sexism photoShutterstock

A survey of some 15,000 women was handed to the government on Friday which revealed the extent of sexism in the French workplace.

The results, gathered together by the Higher Council of Professional Equality (CSEP), revealed that 80 percent of those polled said they were victims of sexism on a regular basis.

The form that sexism took ranged from anything such as patronising greetings such as “Comment ça va ma petite?” (literally, "How are you my little girl?") and “ma jolie” ("my pretty") to women being the butt of sexist jokes or the victims of sexist decision-making.

According to the report, sexism remains entrenched in the world of work and it can impact heavily on women’s careers.

This sexism works as a “formidable instrument to exclude women in the professional sphere” which has "knock-on effects on self-confidence and performance".

The report notes that most sexism is hard to detect “because stereotypes are so internalized that it becomes invisible".

France’s Minister of Social Affairs Marisol Touraine, who was handed the report, told Metro News she judged the impact of sexism on women “unacceptable”.

She considers “ordinary sexism is when a woman is automatically addressed by her first name or when they are addressed as ‘ma petite’, by people who know full well it is demeaning".

The report makes 35 recommendations to end sexism in the French workplace including launching a national awareness campaign in the media, training for all employees as well as encouraging disciplinary measures to be taken against chauvinists who regularly demonstrate sexist behaviour.