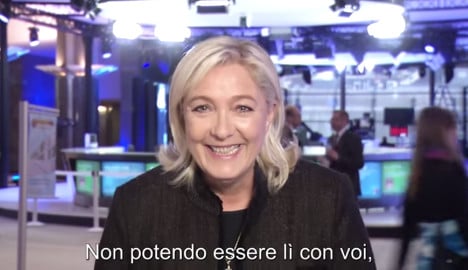 Le Pen has been desperate to try to clean up the image of the National Front party after it was sullied under the leadership of her father Jean-Marie, who has been convicted of hate speech and who once described the Holocaust as a small detail in history.

But it appears she has let her guard down.

On February 28th Le Pen sent a video message of support to her far-right allies in Italy the Northern League (Lega Nord) who were holding a rally in Rome.

The message was broadcast live to the massed ranks of far-right followers from across Europe, who included supporters of Greece’s Golden Dawn party, considered as a bunch of lawless thugs by many and a party for whom Marine Le Pen has distanced herself from.

Also there were representatives from the German anti-Islam movement Pegida.

“Not having been able to join you in person, I wanted to greet you warmly and to send you this message of support after you turned out in huge numbers in Rome today, to protest against the deadly policies across Europe,” she told the crowd.

“I call on you all to keep confidence and courage and look to the future with a smile and determination, to be proud of ourselves,” she went on.

According to French news site Mediapart members of the crowd held aloft images of Benito Mussolini, the former Italian dictator and Hitler ally, as well as Celtic crosses, a symbol of neo-fascist movements.

Le Pen was not feeling so proud on Friday when questioned about her support in the French press.

She says she was only invited by their allies in the Northern League and is not responsible for the groups present at the rally.

“There was no agreement at all with Pegida nor with the cranks at Golden Dawn,” she said. “If there’s some folk present at a mass rally it is not the responsibility of the organizers.”

Le Pen's party however continues to go from strength to strength prompting the French PM Manuel Valls to suggest the National Front could "kidnap France" at this month's regional elections.