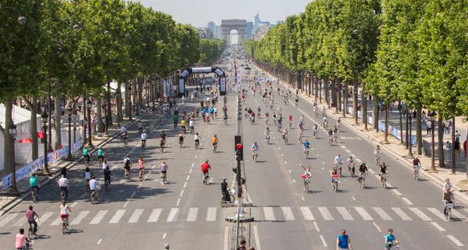 Imagine the Champs-Elysées without cars... Photo: Twitter/Anne Hidalgo
Paris Mayor Anne Hidalgo announced on Twitter that September 27th would be a "day without cars" for the French capital.
It's all part of the mayor's plan to make the City of Light a little bit more green.
However details of the the "Journée sans voiture" have not been made public so its unsure whether cars will be banned from all roads in the city, which is unlikely or just a few main avenues like the Champs-Elysées.

The mayor has been a staunch advocate of improving the pollution levels of Paris, which at their worst, have been compared to being in a 20-square-metre room with eight smokers.
Spikes in pollution in Paris have been causing authorities concern for some years now and even forced them to make public transport free for a weekend in March last year.
Even though 60 percent of Parisians don't own a car, the high levels of pollution have been put down to extremely heavy traffic, as well as smoke from wood fires in people's homes, and industrial fumes.
Hidalgo announced plans in January to clean up Paris once and for all, starting with a ban on "the coaches and trucks that are the most polluting" from July 1st this year.
She said that by the same time next year, the ban would extend to include all polluting vehicles.
She also wants to double the amount of cycle lanes as part of a €100-million-euro bike development plan, and roll out a system of electric-powered bikes along the same lines as the city's popular Vélib temporary bike hire network. The velib bike hire has proved popular in Paris. Photo: The Nitpicker/Flickr