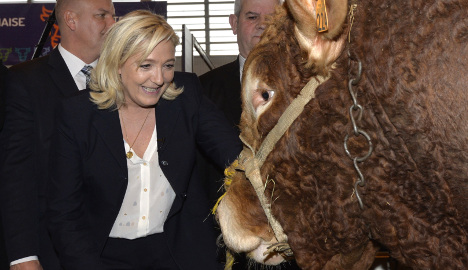 Marine Le Pen pictured here at the Agricultural Fair in Paris last month has taken the bull by the horns as she continues to reinvent her party. Photo: Miguel Medina/AFP

After achieving historic success in last year’s local elections and topping the vote in the European elections, the extreme right National Front party are set for yet more success this month in the latest national election.

On March 22nd and 29th French voters, albeit probably not many of them, will head to the polls to elect representatives in each of the country's 101 départements or counties.

And according to polls many of those voters will be casting a ballot for the anti-immigration, anti-EU National Front, led by the charismatic Le Pen.

As many as 29 percent of them will vote for the National Front according to the latest CSA poll for BFM TV, ahead of both the opposition UMP party (25 percent) and the ruling Socialists (21 percent).

“The National Front are on the rise,” Nonna Mayer, political scientist and far-right specialist from Sciences Po tells The Local.

While it might be easy to dismiss the significance of another round of local elections, in which the rate of abstention could reach 58 percent, the ballot is once again hugely important for the National Front.

“It’s vital for Le Pen that her party has elected representatives. It gives the party much more credibility and visibility,” says Mayer.

“She knows if you want to succeed in politics, it’s not only about the leadership, but you need a party behind it. That means the presence of the National Front in all layers of democracy in France,” she adds.

“It’s a long term strategy. They have been attracting new activists since 2011, including more young people and women,” she said.

The party’s bid to have more elected representatives paid off in last year’s local elections, with 11 National Front mayors voted in. And in May last year as many as 24 National Front MEPs were elected to the European Parliament in Brussels.

However the problem for Le Pen is her attempts to prove that the National Front is about more than just her, have often been hindered by some of their more disreputable candidates.

“The party is trying to convince these new activists to be candidates, but some of them are not really appropriate. Le Pen needs to show they are not racist or anti-Semitic but some of these candidates are not, shall we say, respectable,” says Mayer. If Le Pen is hampered by the shady past of some of her activists then one factor working in her favour is the disarray among France’s two mainstream parties the UMP, now led again by Nicolas Sarkozy and the Socialist Party, both of which have been pulled apart by divisions in the ranks.

Looking towards the 2017 presidential election in which she is expected to make a run-off vote, possibly against either Sarkozy or Hollande, Le Pen could be laughing all the way, well almost, to the gates of the Elysée.

“She has good reason to laugh. If the left and the right remain divided then it will be a boulevard for Marine Le Pen. They are becoming an asset to her," Mayer says.

“In politics anything can happen and you never say never,” she notes, adding that it’s far too early to predict what will happen two years from now.

“She’s building the party but that is in the long term. She still hasn’t convinced the majority of the population. Even though she has a better image than her father, she’s still perceived by many as being racist and extreme,” Mayer said.

“And that makes it very difficult to be elected president of France.”