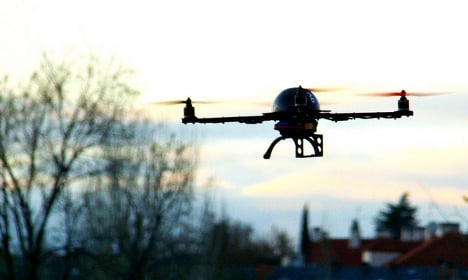 The drones are back in town.

From the Eiffel Tower to the gates on the edge of the city, several unmanned aircraft were spotted over the city on Tuesday night, as the mystery of the overflights goes on.

BFM TV reported that after spotting a drone near the Porte de Montreuil in the east of the city, officers chased the device through the streets hoping to find whoever was at the controls.

However both the drone and its pilots were able to get away, mainly thanks to the heavy Paris traffic which hindered the police.

Reports in the French media say the drone was picked up by four men, who fled in a black car around the peripherique ring road. They were still being hunted by police on Wednesday.

Authorities are now scrambling to work out "if all the reports were really drone flights," said a police source who declined to be named.

No arrests were made over the flights, which reportedly took place overnight Tuesday near the River Seine, the Place de la Concorde, the Invalides military museum and around the Paris ring road.

French authorities are still scratching their heads to find a motive for the drone flights, as Interior Minister Bernard Cazeneuve announced late on Tuesday there had been around 60 incidents over nuclear plants or over Paris since October.

READ ALSO: How can France stop the attack of the drones

Is this drone interceptor the answer for police in Paris? Photo: YouTube screenshot

On Tuesday, a court fined a British journalist €1,000 ($1,100) for flying a drone over central Paris, and confiscated his machine.

Tristan Redman, 34, from the Qatar-based network Al-Jazeera, was arrested last month in the Bois de Boulogne park on the western edge of the French capital along with two other journalists.

The two others were released and Redman pleaded guilty to flying a drone over the capital, which is illegal under French law.

Their arrest followed two nights of unexplained drone sightings over the French capital, although a source with knowledge of the case said the journalists were not involved in the earlier incidents.

Those mysterious sightings were made near the US embassy, the Eiffel Tower and several major thoroughfares leading in and out of the French capital, police said.

Police have been unable to catch any of the operators of the night-time flights and it is unclear whether they were the work of pranksters, tourists or something more malicious.

France remains on high alert after jihadist attacks in and around the French capital in January left 17 people dead.