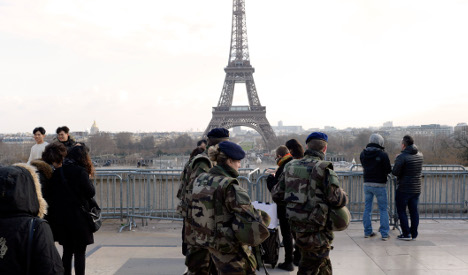 France has been on edge ever since the terror attacks in January when 17 people were killed by Islamist gunmen in Paris. And things are not about to return to normal any time soon.

The country’s anti-terror alert system known as Plan Vigipirate, will remain at “attack” level for several months in Ile-de-France and in the Alpes-Maritimes region around the Riviera, according to reports on Wednesday. The rest of France, meanwhile, will remain at “high vigilance” level.

The high attack levels had already been extended until April 10th.

But protecting the country against the threat of terrorism doesn’t come cheap. On Sunday Finance Minister Michel Sapin admitted that the anti-terror measures implemented since January’s terror attacks had cost the government around €940 million.

Speaking on French radio on Sunday, Sapin explained how the money had been spent.

“We need more police, some people specialized in tracing the financing of terrorism or some extra police officers or in the army… and there were also expenses announced to, for example, develop civic engagement,” he said.

Since the attack on the offices of Charlie Hebdo France has deployed some 10,500 soldiers outside "sensitive" sites in the wake of the January terror attacks, notably outside Jewish and Muslim places of worship, schools and media outlets.

The government said that 830 sites were being monitored across France including 30 in Nice, where three soldiers were attacked by a man wielding a knife earlier this month.

Although the heightened police and army presence at least appears to be having some positive affects, with reports in 20 Minutes that the number of property offences, including armed robbery, car theft, pickpocketing and burglary had gone down dramatically since the Plan Vigipirate alert system came into operation.

According to the National Observatory for Crime and Criminal Law Response (ONDRP), there were a total of 117,000 of these crimes recorded in January, 12.4 percent less than in January 2014.