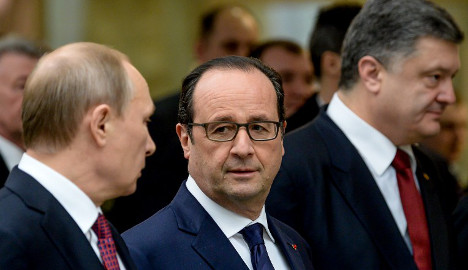 The leaders of the United States, France, Germany, Britain and Italy as well as EU head Donald Tusk held video talks on the Ukraine conflict on Tuesday.

The leaders agreed that a "strong reaction from the international community would be necessary in the case of a major violation in the implementation" of a peace deal agreed in the Belarus capital Minsk on February 12th, a statement said.

They all underscored their backing for the Minsk agreement and the link between current sanctions and the implementation of the Minsk deal.

Washington and its European allies have accused Russia of fuelling the conflict by sending troops and weapons across the border and propping up pro-Moscow separatists. Russia denies the charges.

A series of internationally brokered truces have largely been ignored. The Ukraine conflict has claimed more than 6,000 lives.